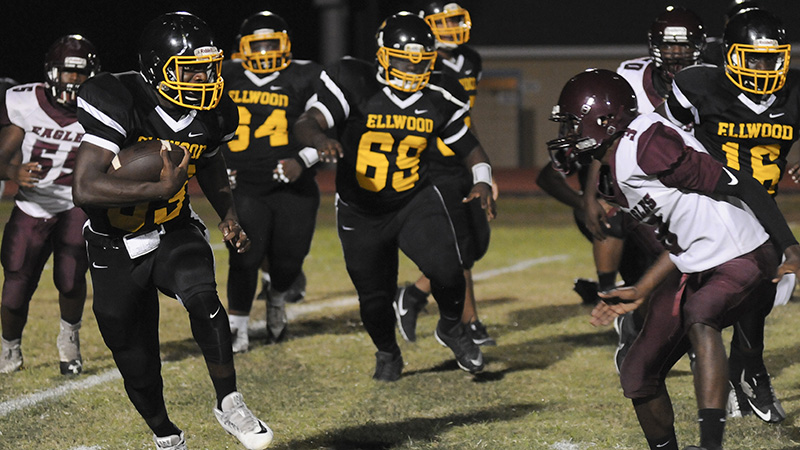 Ellwood Christian Academy didn’t soar high enough Friday in the battle of the Eagles against A.L. Johnson, who left Memorial Stadium with 38-6 win.

Ellwood Christian fell to 0-5 on the season, while A.L. Johnson added a second victory to the win column, making their record 2-4.

“They fought and played good football in the second half. That’s the thing with young players. You’ve got to learn to put four quarters together, and we’re not doing that right now.”

Ellwood turned the ball over on downs on its first possession, and the A.L. Johnson offense went to work.

Several big runs by Deandre Croom helped the Eagles get down near the goal line. Ellwood’s defense stood tall for three plays, but Croom finally got into the end zone on a 3-yard run giving his team an 8-0 lead.

Ellwood’s next drive ended in a punt, and A.L. Johnson scored a few plays later on a 28-yard reverse by wide receiver Demarkio Dandridge. That put A.L. Johnson up 16-0.

Cornerback Adreion Shaw got the ball for Johnson with an interception. Quarterback Robin Harris then found Da’Kendrious Jenkins in the end zone on a 15-yard touchdown pass to go up 24-0.

On the ensuing kickoff Ellwood fumbled, and A.L. Johnson capitalized. Harris scooped up the football and ran it back for six points, putting his team up 32-0 with 13.7 seconds left on the clock.

Ellwood’s defense buckled down in the second half and only gave up one score. A.L. Johnson got the ball to start the half, but they turned the ball over on downs.

“When you’re young and don’t know the positions, you get out of place, so we went into the second half and went over there and explained it to them and walked them through it,” Stokes said. “Once they figured it out, they played better.”

ECA finally got into the end zone after an almost 8-minute long drive that started on their own 46-yard line. The Eagles picked up three first downs and drove down inside the 1-yard line. On fourth and goal, Justin Buford scored on a quarterback sneak up the middle. That made the score 32-6.

Ellwood’s defense forced an A.L. Johnson punt, but the return team muffed the ball and gave it right back on the 17-yard line.

Croom scored on the next play, giving him two touchdowns on the night and his team a 38-6 lead.

An Ellwood fumble early in the fourth quarter squandered any hope of a comeback for the Eagles.

Stokes said his team this is the first season the majority of his players have played football, so this year has been a learning process.

Panthers get a gift, despite getting swept by Montgomery…