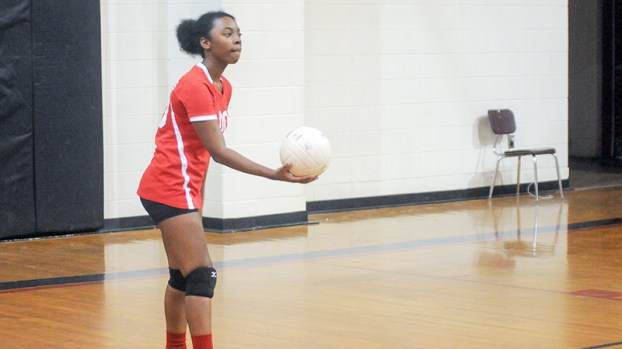 Southside’s Jasmine Smith readies her serve for one of the few opportunities the Panthers to score in Thursday’s three-set loss to Montgomery Academy.

Panthers get a gift, despite getting swept by Montgomery Academy

The Southside High School Panthers had a tough game in their loss to Montgomery Academy Eagles on Thursday night.

On a brighter note, Eagles head coach Julie Gordon had a pre-game surprise for Southside head coach Samantha Henry and the Panthers.

A group of Montgomery Academy players walked to Southside’s bench after warm-ups and presented Henry with a bag full of volleyballs for the program.

According to Henry, Gordon knows that Southside is a young program and so she brings a gift to the team when they play as encouragement.

“She saw the team in its beginning stages, and this is where we are now,” Henry said. “She knows it’s been a battle for us, and we are much stronger now than we were then. It’s just a matter of one coach giving back to the other.”

Montgomery Academy didn’t have to do anything, but Gordon felt that a simple gift could go a long way in helping out a young team.

“When I looked in their ball cart and saw they only had nine [balls] I thought they could use some more balls and a ball bag. I thought it’d be a great gift for my girls to give their girls,” Gordon said. “You’ve got to start somewhere. You saw the double-block they had in the middle that was very good. I think they’re athletic girls, and they just need to stick with it and keep practicing. Eventually, they’ll get there. A lot of programs have been around for many years, and it doesn’t happen overnight.”

Even though the Panthers are slowly improving, Montgomery Academy didn’t take it easy on them.

They lost 12 points to aces alone in the first set. They were nearly shutout before Montgomery Academy served a ball straight into the net on the first game point.

The Panthers put up a stronger effort in the second set and kept the game close through the first several points.

The girls struggled to return serves in the first set, but were much better in the second getting the ball back over the net.

“Had we gotten nothing on the board, then I probably would’ve been upset,” Henry said. “By them getting scores on the board, it showed that they played up to their potential.”

Montgomery Academy had an advantage at the net all evening, but the Panthers figured out how to block a few of the hard spikes.

Minus a few errors, Montgomery Academy ran away with the third set.

They scored on seven aces and gave Southside limited opportunities to start with their own serve.

Southside’s next game will be on Oct. 4 against Ellwood Christian. The match against Autaugaville on Oct. 5 has been canceled.

Bragging rights are up for grabs in local rivalry game