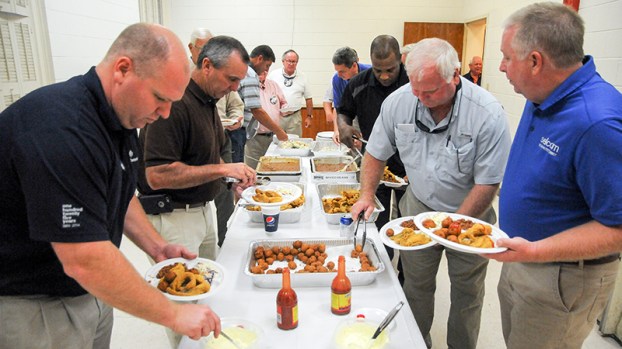 The Selma QB Club gathered for their third meeting of the year Monday night to hear from award-winning sports writer Ron Higgins of The Times-Picayune (New Orleans).

Higgins was named Louisiana Sportswriter of the Year by the National Sportscasters and Sportswriters Association in 2016.

He has won more than 150 writing awards and published four books during his distinguished career.

In his first trip to Selma, Higgins shared his knowledge of southern football and the status of the SEC.

“Southern college football fans know their stuff, and you better know your stuff when you stand in front of them because they will call you out,” Higgins said. “I love it because they are so passionate.”

Higgins joked through his speech, but the theme was clear. Southern football culture is unique from the rest of the country, and Alabama’s success is a direct result of the many characteristics that make up Nick Saban.

Aside from the tailgates and the drinking that goes along with it, Higgins said that football is a part of life in the South.

It’s more than just a game on Saturdays in the fall, but a year-round fixture in the lives of southern sports fans.

“I love coming to quarterback clubs, especially in the South, because they truly live college football every single day,” Higgins said. “They live it, love it and they know their football.”

Higgins is from Baton Rouge, Louisiana, and graduated from LSU. He’s had an inside view of the SEC for more than 30 years. He is the only sports writer to have attended and covered each SEC championship game.

In his review of the SEC, Alabama will remain the team to beat until either Nick Saban leaves or another coach is able to emulate his process, work ethic and personality.

He told the QB Club that the reason assistant coaches find it difficult to work with the top coach in college football is the same reason that makes him a championship coach.

Saban’s attention to detail, refusal to accept anything less than his expectations and his demand for complete control are what makes him the successful coach that he is, according to Higgins.

In addition to the superior coaching, roster depth is another area where Saban outclasses his competition.

“This is how Alabama is better than everybody else,” he said. “They win championships not because of their starters, but because of their depth. Once you get into late October or November, you’re running on fumes… If you’re going to beat Alabama, you better beat them by the end of September or early October.”