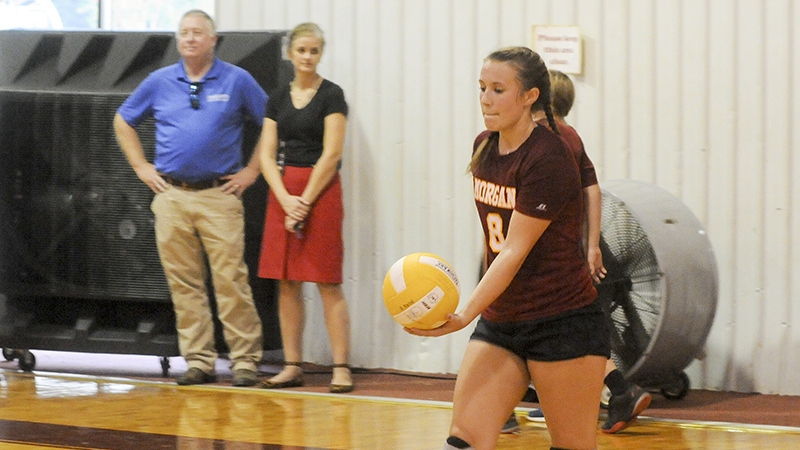 Morgan Academy’s Kenzie Horton sets up her serve in the loss to Clarke Prep on Thursday night. The Senators are now 12-3 on the season and 4-1 in the region.

In the second to last area game of the season, the Morgan Academy Senators volleyball team (12-3) lost to Clarke Prep in four sets Thursday night.

The Senators beat an undefeated Clarke Prep on the road in four sets this past August.

Unfortunately, Clarke Prep was able to avenge their loss on Morgan Academy’s court and gave the Senators their first area loss on the season.

Morgan Academy is now 4-1 in the area, but their seeding in the region tournament could now be up in the air.

“If we would’ve won this one and finished the rest of the season strong, we could’ve potentially ended up undefeated in the area,” Morgan Academy head coach Kayla Thacker said.

The energy of the game was matched by a full crowd. A group of Morgan Academy students formed a student section in the stands and tried their best to cheer on their team and distract the Clarke Prep players.

The Senators effort and play didn’t match what the final scores would suggest. Even though they only won one set in the match, the Senators played well.

“Playing Clarke Prep is always an intense game,” Thacker said. “They’re a good team. I tell [the girls] it’s like playing ourselves. [Clarke Prep] is equivalent to us in my book.”

The first set was close the whole way through, but Clarke Prep was able to edge out a 25-20 win.

Morgan Academy dominated the second set, and won it 25-12.

Tindall Albritton had an amazing stretch serving in the second set that led the team on a nine-point scoring streak before Clarke Prep had to call a timeout.

“Tindall had a lot of kills and played the net really well,” Thacker said. “She had several saves in the back row and had aces. We banked on her serving, so I think she did a fabulous job tonight.”

However, Clarke Prep wasn’t fazed by dropping the set. They returned to form in the third set and the teams were back in a fight.

“I think our girls played good,” Thacker said. “We suffered a little bit on tipped balls and they had a good game plan to come in and beat us, but I think all the girls played so hard the whole time.”

The next game for Morgan Academy will be Monday Sept. 25 at home against EMCA at 5 p.m.