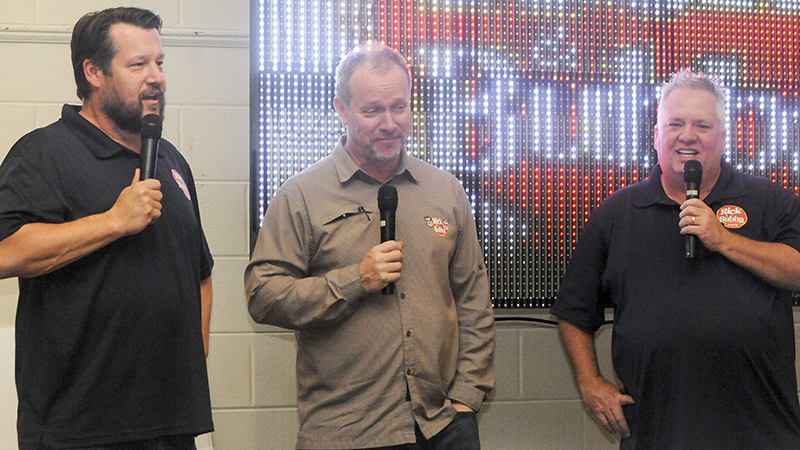 Rick Burgess, Greg Burgess and Bubba Bussey from the “Rick and Bubba Show” entertained a full audience during “Ladies Night” for the Selma QB Club on Tuesday.

The Selma QB filled nearly every seat in the Carl Morgan Convention Center on Tuesday night when special guests Rick Burgess, Greg Burgess and Bubba Bussey from the “Rick and Bubba Show” came to speak.

Rick, Greg and Bubba kept the crowd entertained with stories from as far back as their high school football days to their favorite moments on their show.

The radio personalities received a standing ovation after their introduction from a crowd that was eager to hear them speak.

“We got a very warm welcome, and it was a great crowd,” Bussey said.

The QB club members and guests were laughing with the radio personalities throughout the night.

“This is what it’s all about,” Rick said. “It feels great to be able to come and spend time with the people face-to-face, it really does.”

“We love the Selma area. They’ve been with us for years,” Greg said. “It’s like coming home, and we had a great time.”

This was the second QB club meeting of the year, since last week’s scheduled meeting was postponed due to the potential threat of Hurricane Irma.

Even though they had to skip a week, the combination of the radio personalities and the “Ladies Night” promotion kept the interest high. Fewer than 10 women were at the club’s first meeting two weeks ago, but the count at Tuesday’s meeting more than doubled that of the initial meeting.

The biggest highlight of the night was a surprise announcement at the end of the event. Finance chairman and club member Forrest Hatfield presented two checks of $100,000 each to representatives of The University of Alabama and Auburn University for the Selma QB Club scholarship endowment fund.

“We had accumulated a little money over 30 years, and the board decided we needed a good way to spend some of that money to better use it for the kids in Dallas County,” Hatfield said. “That endowment is $100,00 a piece, which will provide a minimum of two $2,000 scholarships to each university perpetually.”

The endowment is setup where the principal investment remains intact, and the money only comes from the interest earned overtime.

“As far as I know, it’s the first and only quarterback club that’s really stepped up with such a wonderful gift,” he said.

Leslie Abernathy, director of corporate and foundation relations for The University of Alabama, was able to add an extra surprise to the gift the QB club presented.

“Our alumni association, which does a great job raising money for scholarships, are able to provide a match to this gift,” Abernathy said. “Instead of it being $100,000, it’s going to be $178,000 that’s going to be awarded to students from this county.”

The Selma QB Club has come a long way from when they first started in 1941, when they awarded just one $250 scholarship. The big announcement was received with a standing ovation, and both Dr. Williams and Abernathy were presented with a huge check.

The Selma QB Club will go back to meeting regularly on Mondays next week, and sports writer Ron Higgins will be the next guest speaker.