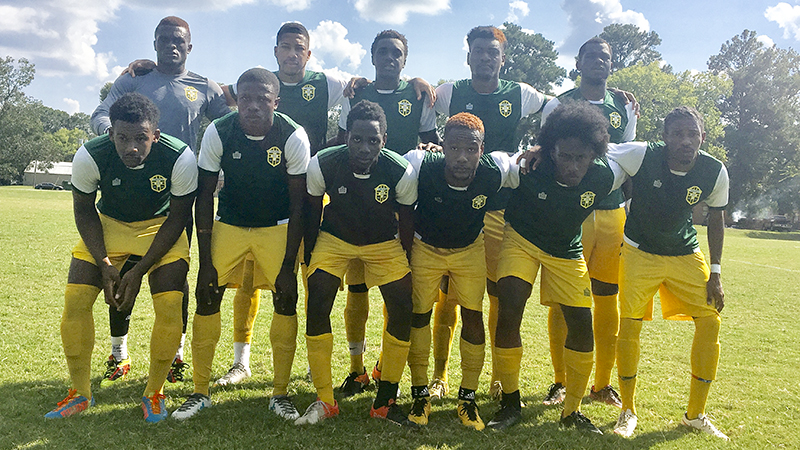 Concordia head coach started a full lineup of freshmen in Saturday’s 12-0 victory over Oakwood University. The Hornets are 5-1-1 this season.

The Concordia College Hornets (5-1-1) soccer team defeated the Oakwood University Ambassadors (0-6) 12-0 in their first home game this past Saturday.

The Hornets scored six goals in each half and every goal in the game was scored by a freshman, according to head coach Jeanfund Jean.

“It went exactly how we expected it to be for us,” Jean said. “We started aggressive and everybody moved the ball well.”

The shutout was earned by Sakoue Kamgang, a freshman goalie from Cameroon.

“Normally a goalie starts the whole season, but with us, all three goalies play,” Jean said. “We rotate every game.”

“He’s just that great of a young man,” he said. “He allowed the other goalie to play while he provided moral support and was the ball boy. That’s true leadership right there.”

This was the second meeting between the two teams this season.

The Hornets shut out Oakwood University 6-0 back in August.

The Hornets are a freshman heavy team with players from different countries. They practice every morning from 5:30 a.m. until 7:20 a.m., according to Jean.

“It’s all about team connection and playing for each other,” he said. “Even though we’re a small school, we will still finish strong.”

Jean says that because of their international backgrounds, the players know that they must work harder to achieve their goals.

“We don’t have the facilities like other D-I universities, but us being international, we know what the struggle is,” he said.  “Therefore, we appreciate what we have. When we step on the field, we step on it with pride in our country as well as the institution.”

The Hornets have players from Haiti, Jamaica, Mexico, St. Lucia, Honduras, Mexico, Spain, Cameroon and Dominica on this year’s team.

“We have the same mindset, and it’s all about winning and fighting for each other,” Jean said. “It’s a family. When one suffers, we all suffer. When one wins, then we all win.”

The home opener was a successful one and Jean was also surprised to see Stephanie Hamm, mother of two-time Olympic gold medalist and two-time FIFA Women’s World Cup champion Mia Hamm, was in attendance.

“We enjoyed playing for the people that was there, and we enjoy playing for Concordia,” Jean said. “Every year, we try to get better and better.”

The Hornets will head down to Florida this week to play against the Ave Maria University Gyrenes on Tuesday and the Florida National University Conquistadors on Thursday.