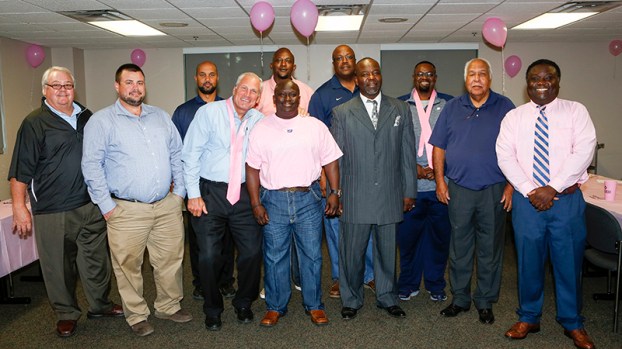 Alvin Craig, lead radiology technician for Vaughan Regional Medical Center, has dedicated much of his time to the American Cancer Society’s Relay for Life Selma and Dallas County.

Craig, along with other men in the community, met Tuesday for a kickoff and will compete in a friendly competition to see who can raise the most money during the month of October to go towards breast cancer research and patient care.

“We were challenged by other communities, other counties, about Real Men Wear Pink,” he said. “It’s a friendly competition between men, and all the money goes to raise money for breast cancer.”

Craig said he’s in it to win it, but no matter what, it’s a win for everyone involved.

“Even if you don’t win, even if we challenge other communities and we lose, it’s still a win for the American Cancer Society and those that are suffering from breast cancer,” Craig said. “I look forward to helping others and help each breast cancer patient, whether it’s male or female, get to that next birthday.”

Dewarren Baldwin, a barber at Resurrection Barber Shop on Alabama Avenue, said he has pledged to participate and raise money for the cause.

“Every hair cut that I cut from this day to Oct. 31, I will donate $1 myself. I will also ask for donations as the men come in. If the men come in with a pink shirt on, they will get a discount,” Baldwin said. “I am a Christian and I believe in helping others. My walk is just as good as I do for others.”

Baldwin said he still wants to be the top man in the competition.

“We are all winners, but the competition is among this group of guys and I want to be the top guy,” Baldwin said. “I’m very excited.”

David McCormack, CEO at Vaughan, said he is glad to help out and raise money for people in the community.

“We’re here to make the community healthier, and anything we can do to promote health, we certainly want to be a part of that,” McCormack said. “Cancer is preventable in some ways, but it certainly detectable and early detection is the key. We want to promote that early detection. The earlier you can get it diagnosed, the quicker you can get it addresses, and it saves lives.”

Craig said he set a goal of $500 per man, and a total of $12,500 for Dallas County. Craig said much of the money raised for the American Cancer Society has helped support people in Dallas County.

Many patients are able to stay in Birmingham free of charge, get rides to treatments and get assistance with medication though the funds raised.

The staff members from Kindred at Home Selma have spent the last few weeks gathering food and collecting donations for... read more