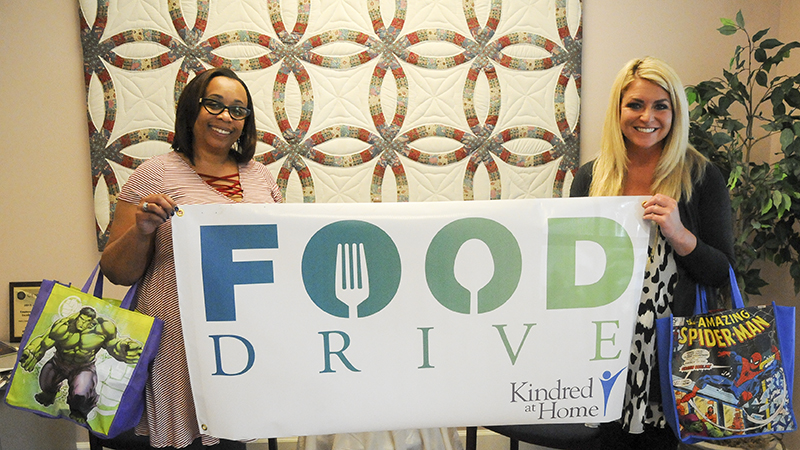 The staff members from Kindred at Home Selma have spent the last few weeks gathering food and collecting donations for the Selma Area Food Bank.

The Selma branch collected more than 206.4 pounds of non-perishable food items throughout the month of August for its 13th annual food drive. In 2016, the company as a whole donated more than 331,000 pounds of goods according to Home Health Specialist Mary Susan Crovato.

“Because of the broad scope of care we provide patients and their families, home health and hospice providers are by nature in touch with their community’s resources and aware of the fact that food banks, pantries and other charitable organizations face increasing demands for assistance,” Crovato said. “The Selma Area Food Bank is one of those organizations that we love to help.” 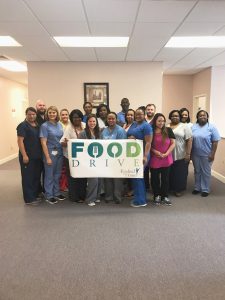 Shown are Kindred at Home Selma employees, who are wrapping up a canned food drive to help the Selma Area Food Bank.

The theme for this year’s food drive was “be a hero for your community.” The recyclable tote bags containing the donated goods had comic book heroes on them to match the theme.

“With October coming up, I went to our local Dollar General and bought hero themed bags like Superman and The Hulk,” Crovato said. “When the food bank got the food out of the bags, they could give away the bags for kids to have in October when they go trick-or-treating.”

The food drive actually brought in more food than the 14 bags Crovato purchased could carry. She needed extra plastic bags and a box just to hold the remaining items.

This year’s total contributions are still being tallied up, but Crovato said every bit counts. After the recent hurricanes that have left so many in need, Crovato found comfort in seeing that people are still willing to come together to help one another.

In addition to the food drive, Kindred also launched an initiative to raise money for Hurricane Harvey and Irma relief. Kindred will match employee gifts to the HOPE Fund up to $250,000 for the next 60 days. The company also pledged to match Kindred employee donations to the Red Cross up to $50,000 specifically for Irma relief efforts. CEO Benjamin Breier is personal donating $5,000 to the HOPE Fund to get the company’s fundraising started, according to an e-mail he sent to his company.

“Seeing our country and our office unite is just a very heartfelt thing for a lot of people,” she said. “It was just a blessing to be able to give back.”