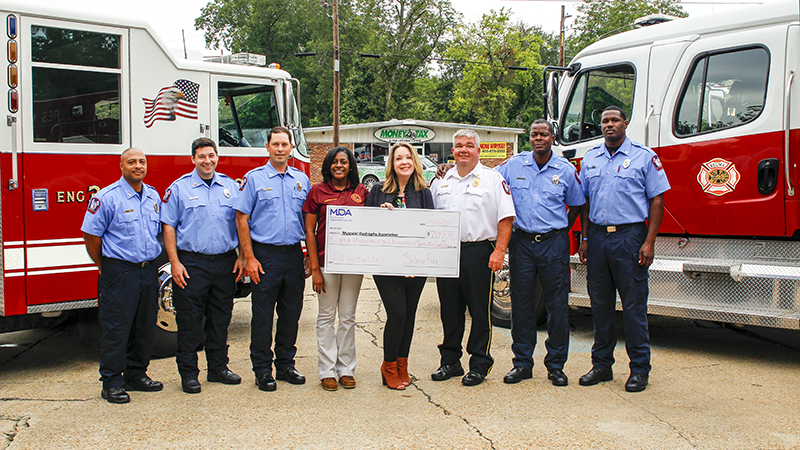 The Selma Fire Department raised more than $8,100 for the Muscular Dystrophy Association during this year’s Fill The Boot campaign, the most in the fundraiser’s history.

The Selma Fire Department had a record year for its Fill The Boot campaign to benefit the Muscular Dystrophy Association.

The department raised $8,177 for MDA, the most in the fundraiser’s history.

“They always do an amazing job. Last year was the top year to that point. This year is the top year now. It’s pretty exciting,” said Angie Jordan, executive director of the south Alabama office of MDA. “We appreciate our partnership with Selma Fire and Rescue.”

The money will be used to help the MDA research neuromuscular diseases and provided services for local children who suffer from them.

Fire Chief Toney Stephens said all the credit goes to his firefighters, who spent hours this summer collecting donations from the public.

“I want to say thanks to all the guys because they are the ones that made that possible. They spent many hours going out in the hot sun standing in front of Walmart,” Stephens said.

The fire chief also thanked Walmart for their corporate partnership as well as citizens who heeded the call to help.

“The citizens responded very well, and I want to thank them for their generous donations,” Stephens said.

The Muscular Dystrophy Association (MDA) is an American organization which combats muscular dystrophy and diseases of the nervous system and muscular system in general by funding research, providing medical and community services, and educating health professionals and the general public.

The organization was founded in 1950 by a group of concerned parents of children with muscular dystrophy.

Muscular dystrophy is a group of diseases that cause progressive weakness and loss of muscle mass. Symptoms of the most common variety begin in childhood, primarily in boys. Other types don’t surface until adulthood.

Some people who have muscular dystrophy will eventually lose the ability to walk. Some may have trouble breathing or swallowing. There is no cure, but medications and therapy can help manage symptoms and slow the course of the disease.