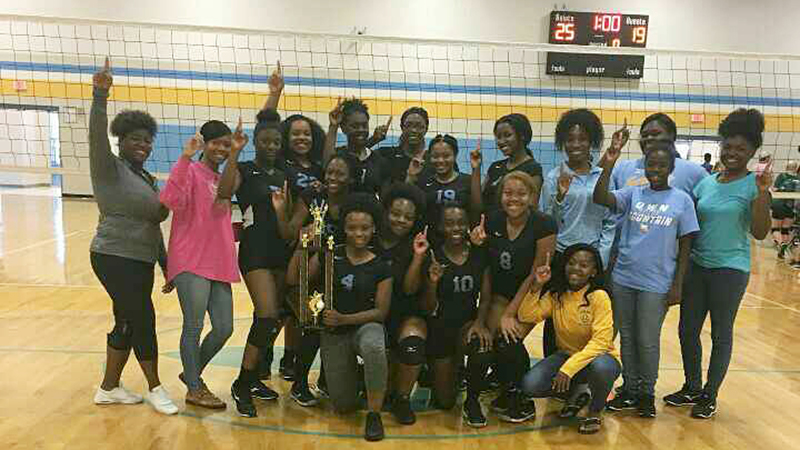 Autaugaville, Dallas County and Southside all competed in the double-elimination tournament.

The competition was strong throughout the day, but the Saints were able to finish without losing a single set.

In the first match, they faced a much improved Autaugaville team that took the first set into overtime.

“Autaugaville kept us on our toes,” Saints head coach Katasha Turner said. “They improved tremendously since last year, so it was a tight game.”

The Dallas County Hornets and the Southside Panthers went three sets in their first meeting of the tournament. The Hornets won the first game 25-16, but the Panthers took the second set 25-20 and forced a third set.

“My team performed very well in this tournament,” Panthers head coach Samantha Henry said. “I felt really good and confident about the tournament itself.”

The Saints won their second match of the day 25-19, 25-13 against the Hornets, and earned their spot in the championship game.

The Panthers’ re-match against the Hornets also went three sets. This time the Panthers won the first set 25-15. The Hornets answered with a 25-19 win in the second set.

The Panthers came up short in the tie-breaker 15-11 and were eliminated.

Henry was proud that her team competed well against the other schools and kept the games close. Destiny Davis had a really good tournament for the Panthers blocking balls and scoring points at the net.

“The front row of all the teams were not expecting her to block the ball,” Henry said.

The Hornets stepped their game up in the championship match against the Saints.

“We did pretty good,” Hornets head coach Linda Moore said. “Our expectation was to go in and win the tournament since we won it last year, but I’m satisfied with the outcome. The girls played really hard.

According to Turner, the Hornets were able to spot a weakness and went on an eight-point run. Selma won a close first set 25-23.

The Hornets only returned one starter from last year’s team, so Moore is in the process of rebuilding with a young roster.

The veteran Keyondra Fletcher is a utility player that stepped up for her team, according to Moore.

The Saints were able to win the final set of the day 25-19 and posed with the tournament trophy after the game.

“Coach Turner has really done a great job with her volleyball team,” Moore said. “It’s always a good competition when we play against each other.”

The team is off to a hot start this season, but Turner is still pushing the Saints to improve.

“We cannot sit back just because we’re 5-1 right now,” she said. “The season has just started and everyone gets better as the season goes on.”