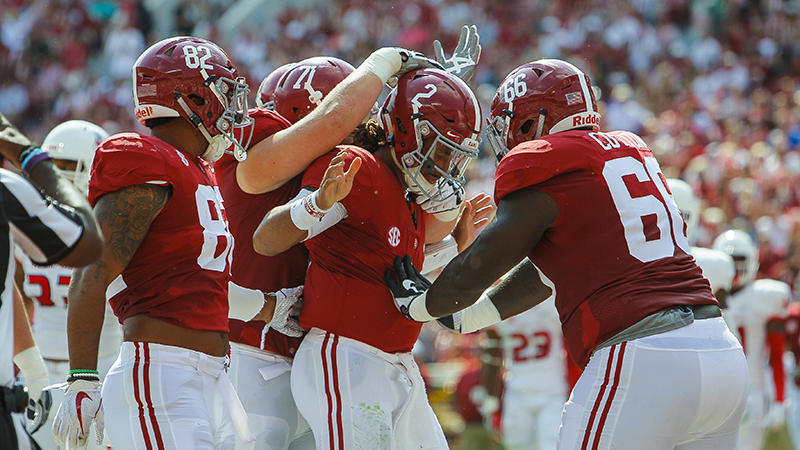 Alabama quarterback Jalen Hurts is congratulated by teammates following a score in the Tide’s 41-10 win over Fresno State.

The Alabama Crimson Tide were operating smoothly from the first whistle in their 41-10 win over the Fresno State Bulldogs Saturday afternoon in the home opener.

Alabama received to open the game and it took only two plays for quarterback Jalen Hurts to get into the end zone on a 55-yard run. The PAT made the score 7-0 in the first 39 seconds of the game.

The Crimson Tide were able to move the ball quickly and efficiently against the Bulldogs for the entire first half. On their next offensive drive, Hurts continued to carve up the Bulldogs with his legs and his arm.

He hit his tight end Hale Hentges for a wide-open 23-yard touchdown pass over the middle. The extra-point attempt gave the Crimson Tide a 14-0 lead in the first quarter.

The Bulldogs hadn’t backed down from the Tide yet. Fresno State quarterback Chason Virgil answered with a 72-yard drive against the Crimson Tide defense.

Unfortunately for the Bulldogs, they were stopped on the nine-yard line when the Bama defense didn’t fall for the play action bootleg.

The Bulldogs settled for the field goal and put up their only three points of the half with 4:03 remaining in the first quarter.

Hurts took his time on the following drive and ended the first quarter on the Fresno State 3-yard line.

At the end of the first quarter, Hurts was 10/11 with 91 passing yards and 78 rushing yards with two touchdowns.

“He did a great job today. He threw the ball to the right place, was accurate with the ball, he kind of took what the defense gave,” head coach Nick Saban said. “I would’ve like to see us make some more explosive plays in the passing game, but the passing efficiency was a lot better.”

On the second play of the second quarter, Hurts got his second rushing touchdown on a 3-yard run.

On Alabama’s next possession, head coach Nick Saban put in freshman quarterback Tua Tagovailoa. Saban said the game plan was always to get Tagovailoa some reps in the second quarter.

Tagovailoa completed his first two passes for 15 yards but wasn’t able to sustain the drive much longer after that.

On Alabama’s next possession, Hurts came back into the game and the offense became unstoppable again. This time, it was running back Damien Harris who scored on a 5-yard touchdown to stretch the lead to 28-3 with 1:15 left in the first half.

“Starting the game out fast like that was a good sign for us,” Harris said. “Sometimes you can come out slow in games like these, and we just wanted to come out fast. That’s a part of the fundamental execution that we focused on all week.”

The Crimson Tide dominated the first half across the board. Alabama had 16 first downs to Fresno State’s seven. The Crimson Tide rushed for 170 yards, 119 of which belonged to Hurts, while the Bulldogs only had 31 yards on the ground.

The third quarter was the only time that the Bulldogs were able to keep the Alabama offense out of the end zone.

The Crimson Tide did have a great opportunity for another score late in the third. A 16-yard rush by Hurts put the ball on the nine-yard line, but three straight rushing attempts by freshman running back Najee Harris failed to get across the goal line. The team settled for a field goal to make the score 31-3.

Midway through the fourth quarter, defensive back Anthony Averett intercepted Virgil on his own 34-yard line and returned the ball to the 4-yard line.

“It was a big deal. It was my first pick of my career actually, so this is a big one, an exciting one,” Averett said. “ As soon as I had the ball in my hands, I just ran as fast as I could to try to get to the end zone.”

Again, Alabama failed to get into the end zone. Najee failed to gain a yard on first down and Tua threw two incompletions before Andy Pappanastos came in make his second field goal of the game to make the score 34-3.

Despite the game being out of reach, Virgil and the Bulldogs answered with a four play, 37-yard touchdown drive. Virgil hit Derrion Grim on a 26-yard pass for the Bulldogs first and only touchdown of the game.

In Alabama’s final offensive drive, Tagovailoa finally took advantage of his red zone opportunity and completed a 16-yard touchdown pass to Henry Ruggs III to push the score to 41-10.

“We executed the game plan, came out and played hard,” Hurts said. “We did a way better job of executing.”

Hurts finished the game with 154 rushing yards and two touchdowns on the ground. He also threw for 128 yards and a touchdown. He used the only word that could accurately describe his performance, “productive.”

Najee took advantage of his heavy workload in the second half by earning 70 yards on 13 carries.

Damien and Bo Scarbrough, who played mostly in the first half, gained 36 and 32  rushing yards respectively. Damien was the only running back to make it to the end zone.

The Crimson Tide will host the Colorado State Rams next Saturday at 6 p.m. CT.