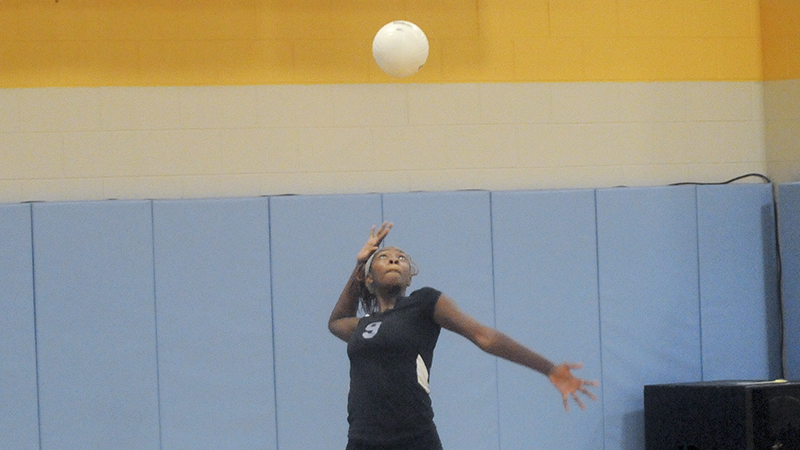 Aeranna Manual tosses the ball for a powerful serve in the Saints’ loss to Chilton County on Thursday night.

The Saints fell behind early in the first set. They were unable to respond to the Lady Tigers’ several scoring streaks, including one in which Chilton County went on a seven-point run.

The Saints made a late comeback attempt while down 24-12. The girls scored five consecutive points to bring the score to 24-17. Unfortunately, they hit the ball into the net on the last possession of the set, and Chilton County won the first set 25-17.

“Service errors, and a lot of free balls cost us in the first set,” Saints head coach Katasha Turner said.

The Saints also struggled to score in the second set as well. They scored the first match of the game, but had issues keeping the serve on their side of the court.

The Lady Tigers didn’t play score as often as they did in the first set, but were still able to put enough smaller scoring streaks of two and three points throughout the set to separate themselves from the Saints.

Down 24-14, the Saints tried again to make a comeback with their backs against the wall.

This time they were only able to earn two more points and lost the second set 25-16.

Going into the third set, Turner made a few adjustments to try and shake things up, and it worked.

“We struggled very much in the first and second set,” Turner said. “We came back and played better defensively in the third set.”

The Saints won the first five points out of the gate, and they looked like a completely different unit. The third set was filled with a lot of long rallies and hustle plays to keep the ball alive.

This was the first set where Selma was able to hold a lead for the majority of the set. The Lady Tigers called a timeout while they were down 14-10, and then the game started to get interesting.

Chilton County began to creep back into the game as they countered the Saints adjustments. After two quick point exchanges to make the score 15-11, the Lady Tigers scored four straight to tie the game at 15.

The Saints and the Lady Tigers went back and forth all the way until the end of the match. The teams tied the score five more times before Turner called another timeout with the score at 23-23.

The Saints had played their best defense of the night, but were still two points away from extending the match to a potential fourth set.

Out of the timeout, the Chilton Lady Tigers won two points in a row to end the game 25-23.

“We just had some mental break downs at the end that cost us the game,” Turner said. “It’s early in the season, so this is our third game and we’re just trying to see what can work on the court.”

Despite the loss, Turner was still proud of her team for not giving up after losing the first two sets.

“We kept improving and that’s a good thing that I saw during the game,” Turner said.

The Selma High Saints will be hosting a five-team tournament on Saturday at 10 a.m. with Dallas County, Southside and Autaugaville.
Morgan Academy

Morgan Academy won their ninth game of the season Thursday night at Hooper Academy. The Senators lost the first two sets 25-23, but rallied back to win the final three sets 25-12, 25-21 and 15-11. The team is 9-2 now and will face Autauga next at home on Monday at 5 p.m.
Southside High School

The Panthers are 2-1 early in the season. Both of the team’s wins have come against the Keith High School Bears. Their only loss came this past Tuesday against Selma High.

The Panthers next game will be at the county tournament hosted by Selma High at 10 a.m. on Saturday.
Meadowview Christian

The Trojans only have five regular season matchups remaining on their schedule and have only lost two games, according to head coach Tim Burton. Their only two losses came against Tuscaloosa Christian and New Life, he stated.

The team’s next match is a home game against Cahawba Christian on Tuesday Sept. 12, at 5 p.m.
Keith High School Bears

“We lack the experience we need to make the right decisions at the right time,” she said.

The Bears will face Autagaville next at home on Tuesday, Sept. 12.