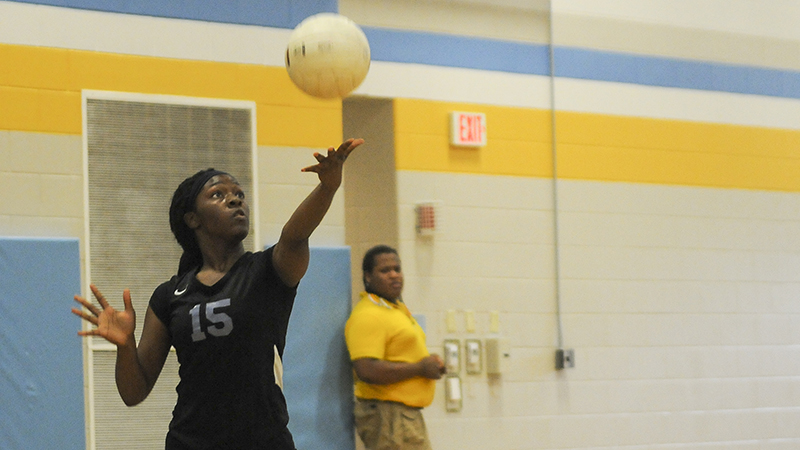 Selma High’s Jakira Simmons tosses the volleyball for a serve against Southside in the 2017 season. Campers will learn how to serve and other fundamentals of the game at the girls volleyball camp at Selma High on July 9 and 10.

The Selma High School Saints hosted both the Keith High School Bears and the Southside High School Panthers Tuesday night for an early tournament to prepare for the remainder of the season.

In the first set, the Panthers got off to a slow start early.

The Saints were up 9-5 before the Panthers went on a four-point run that tied the score. After Saints head coach Katasha Turner called a timeout, her team came back with a 4-point run of their own.

The Panthers took the lead on the next scoring streak of six points to make the score 15-13. That was the Panthers last big push. They only scored three more points, and the Saints controlled the remainder of the first set.

The second set was a one-sided match.

The Saints went on two scoring streaks of more than six points that separated them from the Panthers early. The Saints jumped out to an 18-7 lead early and never looked back.

“We’re just getting started, so I’m just trying to put the best six out there and see how they gel together,” Turner said.

Southside remained on the floor for the second match of the evening against the Keith Bears. The Panthers looked like a different team against the Bears, and the games were much tighter.

The first set was tied at 23, before the Panthers won the final three points back-to-back.

“They had to come together as a team,” Southside head coach Samantha Henry said. “We have a bunch of new people and they had to listen to the veteran players.”

The Bears nearly pulled off an amazing comeback in the second set. They had their backs against the wall down 24-18 when they defended five match points to keep the game alive.

The panthers finally put them away and won the second set 25-23.

The final match of the evening between the Saints and the Bears was the only one that had to go three sets.

The Bears caught the Saints off guard and won their first set of the night 25-23.

“I think my girls underestimated them,” Turner said. “They were better than last year, and it showed.”

The Saints didn’t need to learn the same lesson twice, and they breezed through the second set with a 25-8 victory.

The tie breaker game was as competitive as the first. Both teams refused to let the other build an insurmountable lead. Down 15-14, Keith head coach Towanna Flennory called a timeout to stop a three-point run by the Saints.

Her strategy worked well enough to tie the game at 15 after the time out, but the Saints scored twice immediately after to win the set 17-15.

“We didn’t play well today and had a lot of mental lapses,” Flennory said. “Our youth showed a lot, but as the season progresses we’ll be better.”

The area teams competed well, but are still working on improving their game.  The teams are still coming together, but the level of competition among the schools has improved.

“We want to be better so we can make everybody around us competitive,” Turner said. “I think everybody wants to do the same thing. Every coach in this group has that same mindset.”