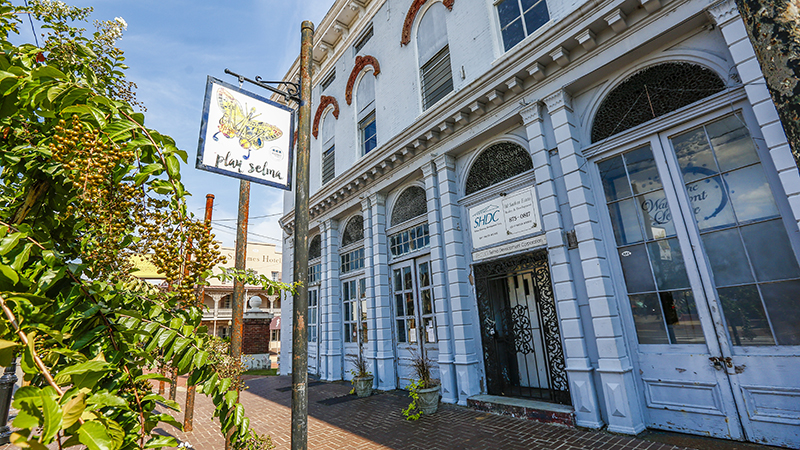 The Blackbelt Benefit Group has an official brick and mortar on Water Avenue beside Side Porch Sandwiches. They plan to have music events and more at the building, named Play Selma, and will be moving the annual Rock ‘N’ Ribs fundraiser back downtown by their building.

The Blackbelt Benefit Group has been busy organizing upcoming events and getting a brick and mortar. The group will now be using the building beside Side Porch Sandwiches for events and as a music hall and have named it Play Selma.

“It’s basically going to be a music hall and we’ll have different bands there throughout the year,” said Clay Carmichael a BBG member.

“We’ll have artists and stuff in and out of there. There’s a world of things that we can do in there. It’s just nice to have a brick and mortar. We’re really excited about it.”

They already have a sign up in front of the building, and plan to utilize its space soon.

“Play Selma was a concept that was brought up in years past and we’ve always wanted a place in downtown that we could have events that would be at our own place that we had a stage inside. Over the years, there hasn’t been a really good place to see a live band,” Carmichael said.

Now that they’ll have their own space on Water Avenue, the group decided that they would like to move next year’s Rock ‘N’ Ribs benefit back downtown.

“We got word from everybody that made it seem like that was the more popular place to have it and the city of Selma seems happy that maybe we would bring it back down there,” Carmichael said.

“Since we’re moving down there, it just seemed logical to have the event down there right there at our building.”

Other changes are ahead for the fundraiser too. Carmichael said they will now be certified by the Kansas City Barbeque Society, which means they will now have judges that are certified and have gone through training to judge the competition.

“We’ll have a panel of judges that travel in from out of town, some local, and we’ll have teams that travel from outside of the state to come in and compete in the contest,” Carmichael said.

Carmichael said he hopes they will be able to lower the cost of the tickets for the public now that it’s a certified contest.

“The teams that do those traveling barbecue competitions typically pay a little bit more, so we’re able to lower the cost of the tickets for locals at the expense of the barbecue teams,” he said.

Carmichael said for those interested in becoming a certified judge, they can visit kcbs.us for more information and to see the location of judging classes. One class will be coming up Sept. 28 in Dothan and is the only class in Alabama for the rest of the year. He said for those that do become certified and want to judge the contest, to let him know by emailing him at claycarmichael@hotmail.com.