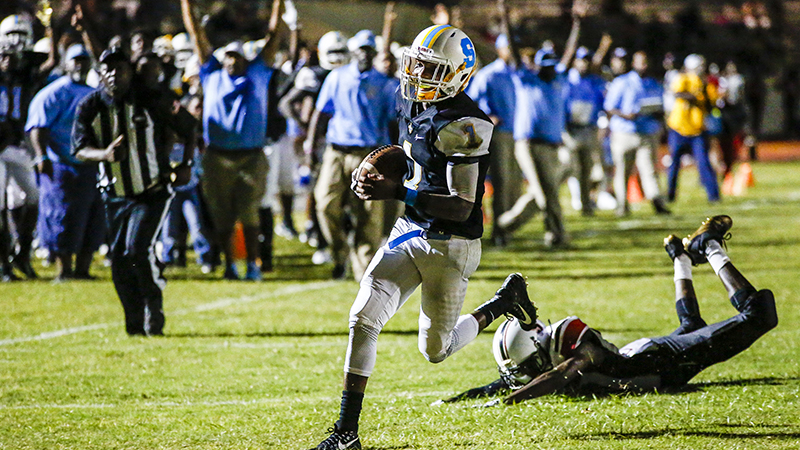 Saints head coach Christopher Raymond earned his first win with his new team against an opponent that he coached from 2000-2007. As a former coach of the team, Raymond still feels a close relationship with the Panthers program.

“It was personal to me. I spent eight years over at Southside, and it was really good for me,” Raymond said.

Selma’s performance was a big turnaround from their Jamboree game against Greenville.

Early in the game, the Panthers were able to move the ball through the air. Quarterback Malik Johnson opened the scoring with a 27-yard touchdown pass with 3:51 left in the first quarter.

The Saints, however, answered right back with a rushing touchdown from Amarian Mollete in the final 30 seconds of the first quarter.

Neither team made their extra-point attempts leaving the game tied at six to begin the second quarter.

“It came down to the trenches,” Southside head coach Daniel Flowers said. “They’re guys came out hungry and they wanted it.”

The Panthers beat the Saints last season, but were unable to keep the momentum on their side.

“I told [Raymond] great game,” Flowers said. “He had his boys ready to play. They lost last year, but those boys were ready. Good game by those guys.”

The Panthers, who had a tough night during their Jamboree game, are still trying to get on track. Ball security has become a recurring problem for the Panthers.

“It’s early in the season and I kind of expect that kind of stuff to happen the first few games of the season,” Flowers said. “As the season goes on, that will start to clean up itself.”

The Saints defense locked down the Panthers offense from then on. The Saints forced five turnovers in the game. Michael Watts, Corbin Carter and Jaylen Robinson got an interception in the game. Jacorey Brown recovered the first fumble of the game, and Kellddrick Carter returned one for a defensive touchdown late in the third quarter.

On offense, the Saints’ balanced attack was able to score on the ground and through the air. Raymond used both Rondarius Sanders and Tyreshon Freeman as his quarterbacks for the night.

“Our offense is designed around our quarterbacks,” Raymond said. “We want to run the ball as well as throw the ball.”

Both quarterbacks were able to find wide receiver Gabriel Wade for touchdowns. Sanders, who rushed for two touchdowns himself, also found Molette in the end zone for his second passing touchdown of the game. Freeman found his way into the end zone on a 19-yard sweep run in the middle of the second quarter.

Together, the offense accounted for six total touchdowns. They also converted four 2-point conversions and made two PAT’s.

Selma High’s offensive and defensive lines won the battle on each side of the ball throughout the game. Panther’s quarterbacks Malik and Gneil Johnson were under pressure the entire night.

“Our offense and defense are executing the schemes better,” Raymond said.

The Saints will host Bessemer City at home next Friday, Sept.8 at Memorial Stadium. The Panthers will be on the road again next Friday when they will play Prattville Christian Academy.