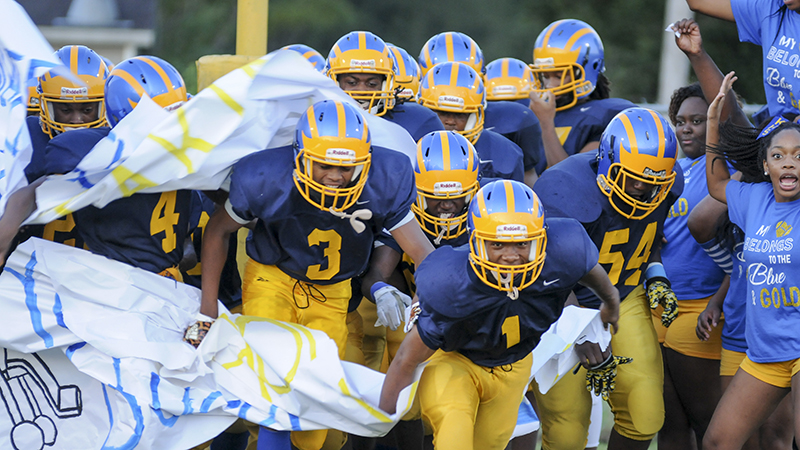 Keith High School takes to the field Friday night. The Bears would win in dominating fashion 49-0 over Calhoun out of Lowndes County.

After coming up short last week against Winterboro, Keith head Coach Harry said his team redeemed themselves Friday night with a 49-0 win over Calhoun.

Keith, now 1-1 on the season, piled on the points in the first half and ran out the clock in the second half.

“I thought they bounced back pretty well,” Crum said. “I don’t think that Calhoun was as strong of an opponent as Winterboro … but our boys showed some resilience and some bounce back.”

The Bears put their first touchdown of the night on the board after a 60-yard drive that was capped off with a 20-yard run around the left side from running back Jeashan Black. Trashaud Jackson added the two-point conversion on a double handoff sweep around the left end, making it 8-0, Bears.

The Bears fumbled their second possession away, but the Keith defense stood tall. Calhoun was forced to punt from their own end zone. William Collins tried to punt it away for the Tigers, but he mishandled the snap and was tackled in the end zone for a safety. That put the Bears up 10-0 with 5:45 left in the first quarter.

A few plays later after a free kick from Calhoun to Keith, quarterback Jared Edwards found a wide-open Jackson in the end zone. That touchdown put the Bears up 16-0 after a failed two-point conversion.

With the ball on their own 39-yard line, Calhoun was hoping to make something happen, but disaster struck. The Tigers fumbled, and Keith’s Denzell Benjamin was able to scoop it up and take it to the house for a 39-yard score. That put the Bears up 23-0 late in the first quarter.

Crum said several players on offense impressed him with their performance Friday night.

Deep in their own territory, another punt attempt went awry giving the Bears the ball on the one-yard line. On the next play Edwards got into the end zone right up the middle, adding to Keith’s lead, 29-0.

Early in the second quarter, Calhoun fumbled the ball again but were able to get it right back when a pass from Edwards was picked off.

Moments later, the Bears defense scored again on a second fumble scooped up. Edwards sacked the Tigers’ quarterback and stripped the ball, while Wilbert Holmes Jr. scooped it up and took it into the end zone. That gave the Bears a 35-0 lead.

“Wilbert was kind of in my doghouse a little, and I didn’t let him run the ball tonight,” Crum said. “It seemed to motivate him defensively, and he had a lot of tackles, so I was proud of the way he bounced back.”

After a Calhoun punt late in the second quarter, Edwards threw his second touchdown pass on the night to Kendarius Perry from 15 yards out, making the score 42-0.

Another botched snap on a Tigers punt gave Keith great field position again. With less than five seconds left in the second quarter, Edwards kept the ball and took it around the right side for a nine-yard touchdown. That put the Bears up 49-0.

The second half was played with shortened eight minute quarters with a running clock for an uneventful finish to the game.