Teen Challenge in need of fridge 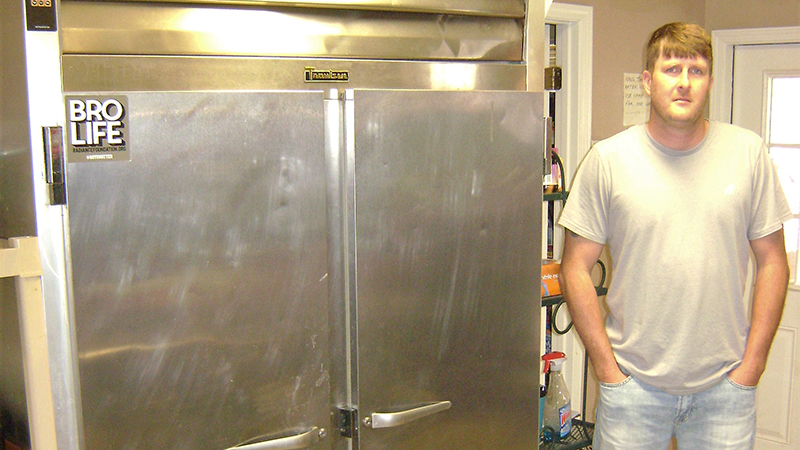 Matt Johnson with Teen Challenge is shown with the organization’s Traulsen refrigerator, which has gone out.

Alabama Teen Challenge in Jones took a big hit this month when their Traulsen commercial refrigerator went out.

The refrigerator gets stocked about once every two weeks with enough food to feed around 20 men, so losing it has been hard on the organization.

“We go to the grocery store about every two weeks, and we just stock up so we have a log of refrigerator items. We have dairy products, eggs, meat,” said Kent Schroeder, intake coordinator.

“When we take a hit like this, it hurts.”

Matt Johnson, labor coordinator, said they had a company to come out and look at the refrigerator, and were told that they had a leak in the coil inside it, and, by the time they replaced that, it would be about the cost of a new one.

A new commercial refrigerator, equivalent to the one they have, will cost around $3,200, and Schroeder and Johnson said they are hoping someone would be able to donate one or sell one to them at a good price.

“If someone would be more than kind to donate one or give us a really good price on it, we sure would be appreciative,” Johnson said.

Schroeder said the organization had someone to reach out to them on Facebook from a post they made about the situation and said he has one they could buy from him, but he is located in Nashville, Tennessee.

“There’s a man in Nashville that has responded to our Facebook post, and he works at a school and they had just replaced some refrigerators up there, and he has one that he said he would sell us for $1,000,” Schroeder said. “It’s just a matter of going and getting it and coming up with the $1,000.”

Schroeder said if no one else is able to help out, they will start fundraising and hopefully raise enough money to purchase the one in Tennessee.

“It would mean the world [for someone to help out] because we try to keep our cost affordable for our students,” Schroeder said. “We don’t charge them anything but a $450 entrance fee, and the rest of our operating expenses are through donations and fundraisers.”

In the mean time, the organization has been making do with a couple of small refrigerators and going out more often to get supplies.

“We’ve been using two smaller refrigerators that we normally keep drinks in for the students … and another small refrigerator that we have,” Schroeder said. “We haven’t been able to stock up. We’ve been having to keep small quantities and run to the store and get things that we need as we need them.”

Teen Challenge is an international faith-based drug rehabilitation program with one of the highest success rates in the world.