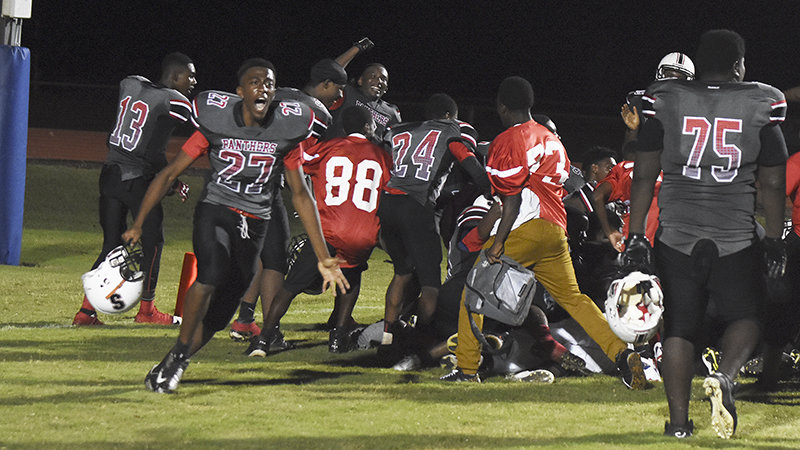 The 2016 Southside Panthers rush the field after defeating Selma High for the first time in 12 years. The rivals meet again this Friday to open start the 2017 season.

The Selma High Saints football team will open their season at home Friday night at 7 p.m. against their rival Southside High School Panthers.

Neither team won their pre-season game, but it prepared them for their first regular season match-ups.

“You’re going to have turnovers, mistakes and missed blocks in the Jamboree game,” Flowers said. “What happened last Friday, isn’t going to happen again this Friday.”

The Selma versus Southside rivalry is an exciting way for both teams to kick-off the season.

Last season was the first time since 2004 that the Panthers defeated the Saints.

“The Selma High game means a lot,” Flowers said. “They are going to give us all they got to win this game.”

The last Panthers team to defeat the Saints in back-to-back years was coached by Raymond in 2003 and 2004.

Now that he’s on the blue and gold side of the football, Raymond is focused on preparing the Saints for the whole season.

“This game will set the tone for the rest of the season,” he said. “It’s not a must win, because whether or not we beat Southside doesn’t determine our playoff future. It’s a game that sets the season up for the long haul.”

This game will be the first one that Flowers and Raymond have coached against each other.

According to Flowers, they both have similar styles on offense. He said that the Panthers special teams units will be key since the offensive and defensive units are set.

The Saints primary focus will be winning the battle on the front lines.

Raymond challenged his linemen to be prepared to have a big game Friday night.

“I’m looking for my offensive line and defensive line to step up,” Raymond said. “If we when the battle in the trenches, we’ll win the ball game.”

Now that the season has officially started, the Panthers and the Saints are eager to play in a game that really counts.

“It’s a rivalry again,” Flowers said. “Both teams are going to go at it, and I feel like the rivalry is back now.”

Other Games This Week

The Morgan Academy Senators (1-0) are coming off a huge 57-6 Week 1 victory over Marengo Academy as they prepare for their first road game against the Tuscaloosa Academy Knights (0-1) this Friday.

The Senators have defeated Tuscaloosa Academy two years in a row, but both of those games were in Selma.

The Senators are off to a great start in 2017 and will need to prove themselves on the road to keep their momentum.
Dallas County (0-0) at McAdory (0-1)

Dallas County Hornets head coach Cliff Matthews was overjoyed with his team’s 41-22 win over Southside High School in last week’s Jamboree, but his win-loss column won’t get its first mark until this Friday.

The Hornets open their season visiting the McAdory High School Yellow Jackets (0-1). Dallas County lost to the Yellow Jackets 33-7 in the 2016 opening game, but still managed to make it to the playoffs.

A player to watch in this game, and for the remainder of the season, will be running back Calvin “CJ” Starks.

During the Jamboree game, Starks had two 60-plus yard rushes for touchdowns and a plethora of highlight plays.

In his first season as a head coach, Matthews is ready for his first game of the season.
Keith (0-1) vs Calhoun (0-0)

The Bears are coming off a 21-14 road loss to Winterboro High School Bulldogs.

The Bears struggled with ball security and gave up three big plays to the Bulldogs.

Head coach Harry Crum said the turnovers were uncharacteristic of a Keith football team, and that it would be a focus during practice.

The team struggled in the first three quarters, but found their rhythm in fourth quarter.

Last week, the Tigers had a bye and will open their season against the Bears.

The Bears will look to get to a strong start at home and get their first win of the season.
Meadowview Christian (0-1) at East Memorial Christian Academy (0-0)

The Meadowview Christian Trojans (0-1) have a Thursday night game in Prattville against the East Memorial Christian Wildcats.

Last year, the team finished the season with a 3-6 record. Meadowview Christian has a new head coach in Micheal Blair.