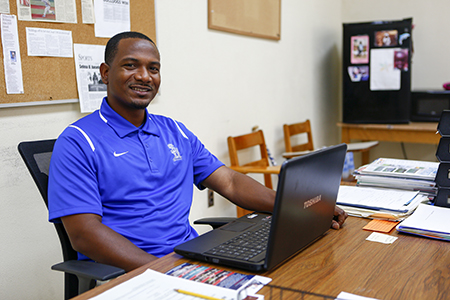 The United States Collegiate Athletic Association (USCAA) and its board of directors announced this past Tuesday that Selma University will return to their conference for the 2017-2018 academic year.

The Selma University Bulldogs baseball team along with the men’s and women’s basketball teams will be independent members of the USCAA, according to athletic director Adrian Holloway.

The university was previously in the National Christian College Athletic Association (NCCAA), but Holloway determined that the USCAA was a better fit for Selma University.

“We’re very excited to be going back to the USCAA,” he said. “That’s a conference where we’ve had some success in. It’s an association that has shown us a lot of respect.”

The USCAA provides “opportunities for small colleges to compete on an equal level of competition with schools of like size and athletic programs.”

“We were trying to go back to the association that we knew was truly created for the small college,” Holloway said. “The way it’s designed is just more feasible and a good fit for us. “

Holloway decided to step away from the NCCAA because he didn’t feel that Selma University wasn’t being treated fairly by the conference.

“We had some issues in the conference we were in,” Holloway said. “We would be the highest ranked team in the region or have the best record in the region, but when it came time for the national tournament selection we would be selected last or as the last seed.”

According to Holloway, Selma University has had issues each year in the NCCAA and didn’t feel that they were treated fairly.

“We just felt like we weren’t being treated fairly in that association,” he said. “It wasn’t a good fit for us. It was supposed to be a small college conference, but it was really designed for the wealthy schools. Schools that had more resources, more money, and we didn’t feel like we got a fair shot.”

As an independent member of the conference, Selma University will have the flexibility to build their own schedules. The Bulldogs will face some NCAA Division II teams and NAIA teams as well, according to Holloway.

“The level of competition won’t change at all,” he said. “The schedule hasn’t changed.”

Holloway, who also coaches the baseball team, said that the basketball coaches were on board with the conference shift as well.

“The basketball program had success in the USCAA also,” he said. “Everybody was pretty much excited and on board with it. We’re ready to get back at it. We’re ready to compete for national titles and be a part of an association that fits us at Selma University.”