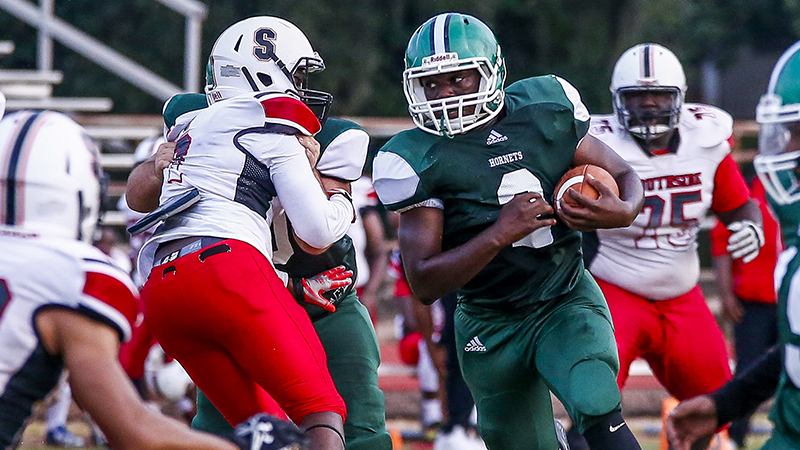 Dallas County’s Anthonie Rubin runs the ball against Southside during a scrimmage Monday at Memorial Stadium.

In a highlight filled game, the Dallas County Hornets defeated the Southside Panthers 41-22 in a Jamboree game Friday night at Memorial Stadium.

The Jamboree served as an early test for both teams and doesn’t count for either school’s official record.

The first quarter of the game was a see-saw match full of touchdowns and turnovers.

Dallas County scored first on a short jet sweep by SeVaughn Brown to the right side of the field to cap off a nearly four-minute opening drive.

Southside quarterback Malik Johnson answered back immediately with a 71-yard touchdown run on their first play of the game. Johnson was sacked on the two-point conversion.

The Hornets were methodically moving back down the field again until they fumbled five yards from the end zone. Panthers defensive back Aaron Carter recovered the fumble and returned it 95 yards for a touchdown. The Panthers second two-point attempt was successful and gave them a 14-7 lead.

Three plays after the kick-off, Hornets running back Calvin “CJ” Starks made a massive 61-yard touchdown run. Starks, who is also the field goal kicker, tied the game at 14.

Starks was unstoppable Friday night as he rushed for over 100 yards and made 5/6 PAT attempts.

“It felt good knowing I can do so much for my team and succeed,” Starks said.

The Panthers punted on their next possession but were able to force another fumble before the end of the first quarter.

The second quarter was less eventful, but the Hornets were able to add to their lead. After a long drive, Hornets quarterback Octavious Palmer scored on a short yard power run to give his team a 20-14 lead. The team missed the PAT attempt.

The Hornets forced a late three-and-out with under two minutes left in the first half. The scoreboard clock was off due to technical issues, but the clock was running. Octavious Palmer heaved a 50-yard Hail Mary pass with three seconds left that was deflected away from the receiver in the end zone.

Dallas County received the ball to open the third quarter, and on the first play from scrimmage, Starks somehow emerged from a crowd of Panthers and finished a 60-yard touchdown run to put his team up 27-14.

Then the game got a little sloppy with back-to-back interceptions thrown by Southside and Dallas County, respectively.

As soon as Southside got the ball back, they fumbled the ball and the Hornets recovered it in the red-zone.

Palmer was able to finish this drive for the Hornets with a touchdown pass down the sideline. After the PAT, the Hornets were up 34-14.

At this point in the game, Southside coach Daniel Flowers started going back and forth between quarterbacks Malik Johnson and Gneil Johnson.

During the first possession of the fourth quarter, the Hornets stripped the ball away from the Panthers quarterback. Traevus Callens returned the fumble for another touchdown.

The Panthers were down 41-14, but they didn’t throw in the towel.

Johnson threw a touchdown late and converted a two-point conversion pass to make the score 41-22.

With the game safely in hand, the Hornets took a knee to run out the clock.

New Dallas County head coach Cliff Matthews was elated after his first victory with his team.

“I got to see everything I wanted to see tonight,” he said. “Everybody stepped up. When we went down again, nobody tucked their tail.”

Matthews also had high praise for his star running back, Starks, for his big game.

“He is the guy to get it started, and the guy to finish it,” he said.

Even Flowers was impressed with Starks performance Friday night.

“Starks has been doing that to me for four years,” Flowers said. “I respect him so much because he plays hard and doesn’t talk smack. He runs hard, makes his moves and then he’s gone.”

Flowers was disappointed with how poorly his team handled adversity in this warm-up game but said that it won’t happen again.

“That was probably the worst game I’ve ever seen them play since I’ve been at Southside,” Flowers said. “We didn’t handle the adversity well, and we could never get ourselves off the mat.”

The game doesn’t count, but Flowers said that his team needed this as a humbling experience.

“They had great success all summer, but they need this humble period,” he said. “This game is going to do it for them. I think this is going to help us for the rest of the season.”

Next Friday, Dallas County will travel to face McAdory, and Southside will play at Selma High School for their first official games of the season.