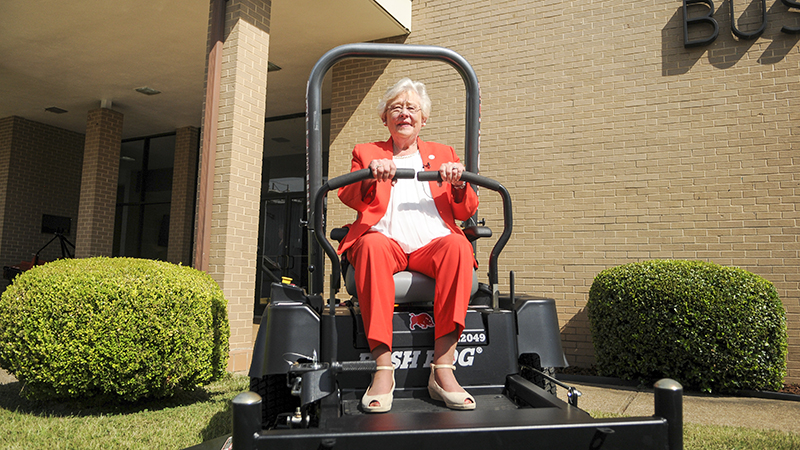 Alabama Gov. Kay Ivey tries out a Bush Hog machine during a visit to Selma on Friday. She also held a town hall meeting with local civic and business leaders later in the day.

Alabama Gov. Kay Ivey was in Selma Friday to tour one of the city’s biggest industries and meet with business and community leaders.

Ivey’s trip to Selma is one of many stops on her “Listen, Learn, Help and Lead Tour” throughout the state.

Jerry Worthington, president of Bush Hog, shared the ins and outs of the 65-year-old company with the governor before taking her on a tour of the plant.

“Being an Alabama born and bred company, I know it’s important to you because we’re one of the growing industries in the state of Alabama,” Worthington told Ivey. “We’re very proud to be here, and we’re certainly proud to have you here and see what we do.”

Ivey, as well as other officials, were loaded up on golf carts and taken through the facility to see how the mowers are made. After the tour, Worthington got Ivey to take a seat on one of their zero-turn mowers.

“As I told Jerry earlier, I was raised on a farm, and dad and I would bush hog on the weekends,” Ivey said after the tour.

Ivey added that she was thrilled about the company attracting welding students from Wallace Community College Selma.

“That’s important. A lot of young folks don’t understand how important of a trade it is, like welding or plumbing and electrical, really important careers,” she said.

Ivey also met with a roundtable of leaders from different areas in the community, such as business, economic development, education and healthcare.

The roundtable discussion was only open to the media for a few minutes, so it is unclear what leaders discussed with Ivey. During the media period, Wayne Vardaman, executive director of the Selma and Dallas County Economic Development Authority, spoke on behalf of Dallas County Probate Judge Kim Ballard, about roads in.

“He is very proud and very pleased with the ATRIP money. It’s been a tremendous help to us here, and I think it’ll go a long way in helping economic development,” Vardaman said. “The ARIP money is more for connector roads, and the roads that aren’t connector roads are a problem for this whole state.”

Earlier in the day, Ivey said infrastructure has been a topic of interest with the other cities she has visited so far.

Ivey said she planned to make wish list of ideas for Selma and the Black Belt area after the meeting to take back with her.

Some of the people at the discussion were Mayor Darrio Melton and his chief of staff, Ollie Davison, as well as Johnny Moss, president of the Selma City Schools Board of Education.

Dr. James Mitchell, president of Wallace Community College Selma, was also there as well as business and industry representatives. Cecily Groves with hotelFUBU was also present. They are in the process of finalizing a deal to purchase the historic St. James Hotel from the city of Selma.