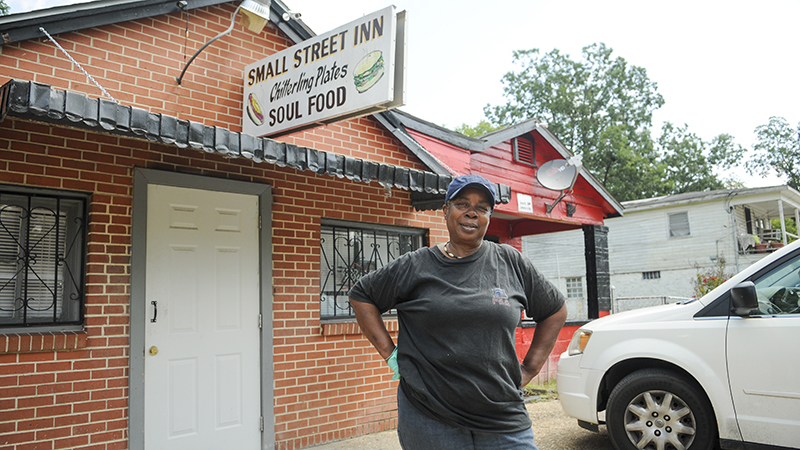 Dorothy Grayson poses or a photo in front of Small Street Inn, a restaurant and club, on L.L. Anderson Avenue. The business has been passed down through her family. (Blake Deshazo | Times-Journal)

Editor’s Note: The Dart is a weekly feature where a reporter throws a dart on a map of Selma and Dallas County and finds a story from wherever it lands.

Just off of L.L. Anderson Ave. sits a red brick building with a sign over the awning that reads “Small Street Inn.”

It’s a restaurant and club all in one that has been passed down through generations of Dorothy Grayson’s family. She’s not sure of the exact year the business opened, but she believes it has been around for nearly a century.

“It’s a family-owned and operated business that’s probably been in existence from probably 90 to 100 years,” she said Saturday.

Grayson said her mother, Marie Likely, ran the business for nearly 50 years after she took it over from her father, E.P. Grayson.

“When my mother ran it, she loved this club. She loved the people that came in,” Grayson said. “They call her Miss Marie of mama or big mama. That was her name. Everybody knew her as that.”

Grayson said she took over about 10 years ago after her mother decided she was ready to retire.

“I was living in Milwaukee, Wisconsin, so she started talking to me,” she recalled. “I decided to move from Wisconsin to here to run it because it was family-owned, and I didn’t want to see it close.”

Grayson said the restaurant used to be open six days a week, but a fire nearly two years ago did a lot of damage, and they’ve gone down to just being open two days a week on Fridays and Saturdays.

While there is music, cards and drinks, Grayson said their specialty is soul food.

One of the things she enjoys most about running a small business is her customers, or as she likes to call them family.

Grayson said it’s not easy keeping a small business afloat, especially after a fire around two years ago that they’re still recovering from.

Despite the ups and downs, Grayson said she is just glad to be able to carry on a family tradition.