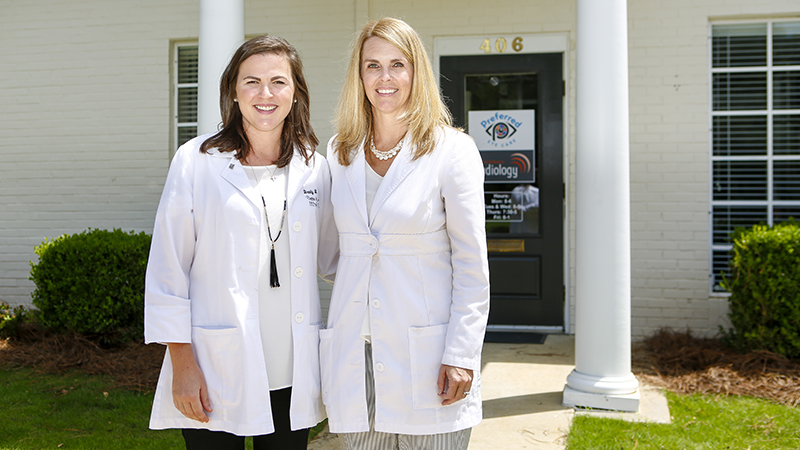 Williams has been practicing for 15 years in Selma, but recently opened up her own business in a new location, and welcomed Rivers and her business to operate out of the same site.

“I think it’s neat that under one roof we’re able to care for two senses that are so important. Your sight and your ears, you’ve got two of each of those,” Williams said. “So it’s kind of a neat niche. If someone wanted to come in and see me and see Dr. Rives, we’re one stop.”

When Williams decided to open her own business, Rives approached her with the idea of operating out of the same building.

“Dr. Williams has been my optometrist for as long as I can remember,” Rives said. “Eyes and ears kind of go together, and we have a lot of the same patient base. I approached her about sharing some space.”

Williams said there was enough room, and she knew they would be a good fit to work together, so they went for it.

Rives has been in business for three years and received her undergraduate from Auburn University and her doctorate from the University of South Alabama.

“I had some audiology courses, and the medical aspect really interested me. I’ve got a grandmother with some hearing loss, so growing up around that kind of interested me in helping people with hearing loss,” Rives said. “It’s a very rewarding job helping people and work with pediatric and adult patients. It’s a variety, and it’s day to day. I just really enjoy it.”

Williams said she always knew she wanted to be doing something in the medical field, but it was after shadowing an optometrist and talking to her about her career that she decided to go for it.

“I was always interested in medical professions since high school, so I always knew I would do something in a medical type of field,” Williams said. “I get to work with patients of all ages, and it is very rewarding helping people to see.”

Williams also attended Auburn University for her undergraduate and then went on to the University of Alabama School of Optometry for her doctorate.

“I think everybody that has come in since we opened has just been very impressed with just the office space,” Rives said. “I love it. It makes coming to work much more enjoyable knowing you’re in a good work environment.”

Both Dr. Williams and Dr. Rives are accepting new patients at their new location.