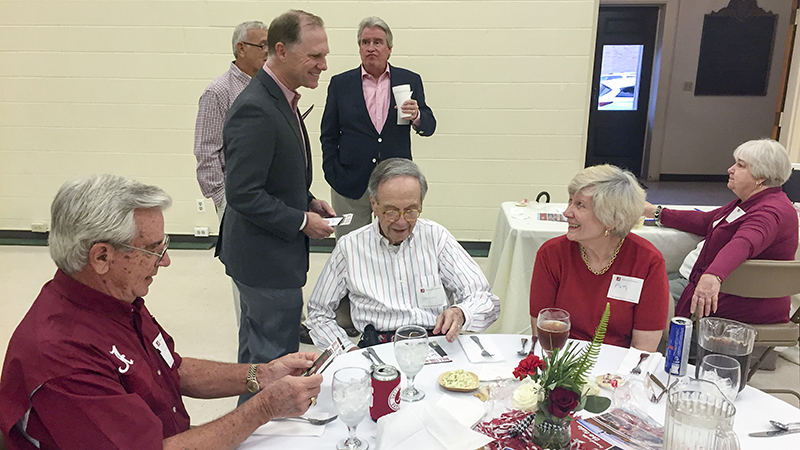 Savage has been the analyst for Alabama football since 2009 when he replaced Kenny Stabler.

“If you need to know anything about Alabama football, this is the man that can tell you,” committee member Ronnie Leet said.

The club began the evening with a social reception when members mingled among themselves, checked out the merchandise from Tide Treasures and met Savage.

“We had a good turnout,” Leet said. “We got as many as we felt we could get here. I think they’re all excited. This is a great time to have somebody that’s knowledgeable of Alabama football to speak to the crowd and give them some inside information on what’s happening in Tuscaloosa with the football team.”

Being only a few weeks away from the kick-off game against Florida State University in Atlanta, Georgia, the club members were excited to fellowship around football again.

The club had nearly every seat in the convention center filled in anticipation of Savage.

“This is the first of a number of events that I’ll do connected to the Alabama Alumni Association before the first game,” Savage said.

This trip was Savage’s first time visiting Selma, and he said he was looking forward to talking to his audience.

“Usually, at these types of events I’ll talk about the head coach Nick Saban with whom I’ve had a long relationship with,” he said. “I’ll talk about the teams’ expectations for this year. I’ll start with a personal story or two and then wrap up with a Q&A.”

After dinner was served, Savage was brought to the stage to address the audience.

He began with a few jokes, including an anecdote about the time his daughter ignored a potential baby sitter because of the Auburn stickers on her car.

He proceeded to describe his long-standing relationship with coach Nick Saban.

In 1991, Savage was hired by Bill Belichick, who was the head coach of the Cleveland Browns at the time and worked with Saban as a defensive assistant for three years.

Savage continued on to elaborate on how this year’s team is shaping up now that camp is over and practice is underway in Tuscaloosa.

“He told us how the players are progressing, the coaching staff and Saban,” Leet said. “He can tell you anything you need to know about the football program because he’s right in the middle of it.”

He spent 17 years in NFL offices gradually moving his way up from being an assistant with the Browns, to a scout for the Baltimore Ravens, then senior vice president and general manager of the Browns and finally as a player personnel consultant for the Philadelphia Eagles.

In June, 2009, Savage was hired as the color commentator for the Crimson Tide Sports Network.

He became the executive director of the Reese’s Senior Bowl in 2012.

Savage promoted his upcoming book “4th and Goal Everyday: Alabama’s Relentless Pursuit of Perfection,” which will release on Aug. 29.

“It’s basically a 360-degree perspective of my own in terms of growing up inside the state when coach [Bear] Bryant was building a legendary program in the seventies, to my time working with Belichick and Saban at the Browns in the early nineties. When a lot of the philosophy that we’ve seen come to fruition in Tuscaloosa and New England has come to life,” Savage said.

He said that all football fans will enjoy his book because it gives a behind the scenes look into how difficult it is to win.

“I was told [Savage] was very good, and every one was saying to come out and here him,” club member Helene Felton said. “I want to see what his book is about. We’re getting ready for the football season, so everybody is all riled up.”