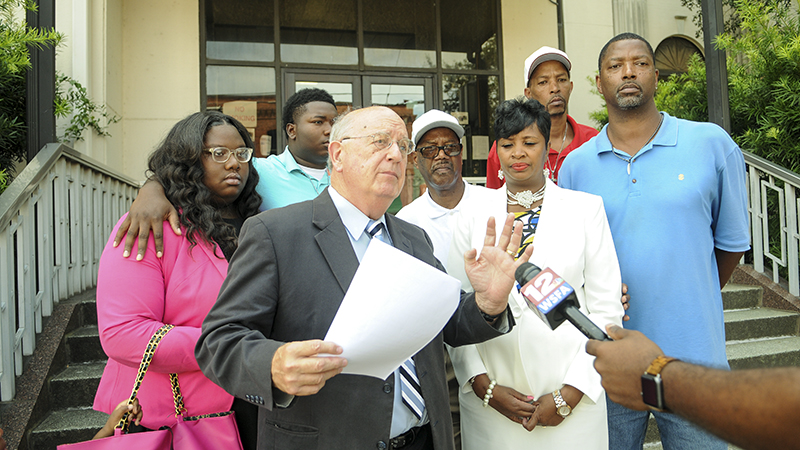 Attorney Julian McPhillips and Dorita Lynn Clay speak about a lawsuit Clay has filed against the local Wells Fargo branch during a press conference last week.

A Selma woman has filed a lawsuit against Wells Fargo alleging a branch manager wrongfully provided account information to a Federal Bureau of Investigation agent and others.

Dorita Lynn Clay, alongside her attorney, Julian McPhillips, and family members announced the lawsuit during a press conference last week on the steps of the Dallas County Courthouse.

“We’re here because we feel like something very outrageous and egregious has happened to her that could happen to anybody here in Selma or elsewhere,” McPhillips said last Wednesday.

The suit, which was filed in Dallas County Circuit Court, names Wells Fargo and branch manager Uleter Nix as defendants. Nix declined Tuesday to comment on the pending lawsuit.

The lawsuit alleges Nix allowed an investigator to view Clay’s bank account, including checks, deposits and transactions, without permission from Clay or going through the proper channels.

“They have to give her notice, and they never gave her any kind of notice, no subpoena, no warrant, no summons, no anything,” McPhillips said. “They just got her information and shared it.”

Clay said the FBI was investigating her friend, who she loaned money to for allegedly embezzling money.

“I loaned this lady a whole lot of money. I’m not talking about a couple thousand dollars. I’m talking about some money,” Clay said. “When she payed me back … they thought she embezzled the money.”

McPhillips said the grand jury no billed the case, which means sufficient evidence was not found to indict. Clay said the reason she was being investigated was because of her past, which includes criminal charges.

According to court records, Clay, formerly West, has been charged in the past with theft by deception, theft of property, forgery and identity theft.

“I got into gambling and made some bad decisions with gambling,” Clay said. “I spent one year in the Dallas County Jail.”

Clay said since then she has tried to turn her life around and has not had any criminal issues.

“She’s not pretending she’s some girl scout,” McPhillips said of his client. “She’s had her issues in the past she’s had to deal with, but it’s been five to six years since she had problems of any sort like that, and now she’s being portrayed as if she’s robbed a bank or something, which she hadn’t done.”

Wells Fargo responded to phone calls from the Times-Journal with a brief statement Tuesday.

“Wells Fargo takes seriously its obligation to protect and safeguard customer information,” the statement reads. “We will review Ms. Clay’s complaint and respond as appropriate.”

McPhillips said last week that he is confident in the case and feels like his client has a valid argument.

“We think we have them almost slam dunk on this thing as far as violating both the federal law and the state law, and we just think it is a huge no-no that they should not have engaged in,” the Montgomery attorney said. “It’s a very great threat not only to her and other people in Selma but to all of America when you’ve got a bank like Wells Fargo that can just throw out her information.”