Salter works way up to captain 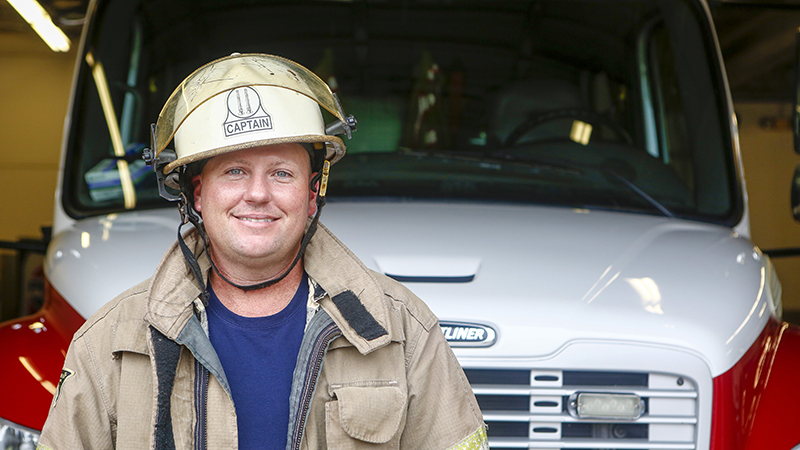 Jeremy Salter began his career with the Selma Fire Department 21 years ago.

Jeremy Salter began his career with the Selma Fire Department 21 years ago and is now a captain in the division.

Growing up in Selma, he knew he wanted to follow in his father’s footsteps and be a fireman, and although at one point that career path didn’t seem like the right one, he later found out it was perfect.

Salter married Colleen, and they have two sons, Trey and Trent. Trent has also joined the fire department and serves as a third-generation Salter fireman.

Salter said being a fireman is an exciting job and he can’t see himself doing anything else.

“It’s fulfilling. You get a feeling of getting something in return,” Salter said.

“It gives you a good feeling [to help someone]. I enjoy the adrenaline. It’s a different feeling than anything else you’ll ever do.”

Salter is one of the men working on the rescue truck, and he said he has seen a lot in his years on the truck, the worst being when children are involved.

“I’ve been on the rescue truck for about 10 years now and we go to wrecks and any other kind of big rescue situations. You see stuff that sticks with you, and you have to figure out a way to block that stuff out,” Salter said. “That’s probably the hardest part of the job, dealing with the kids.”

But overall, Salter said he loves his job and is thankful that he has the opportunity to work for the department and serve alongside the men.

“I love it. I enjoy working with the men, I enjoy training the new guys,” he said. “I’ve enjoyed working for the city. It’s been good to me. I feel like I belong here.”

Salter said with retirement coming up in the future, he hopes that he can leave an impression on the department before his last day.

“I don’t have but a few years left, and I feel like everything I give now will hopefully leave part of me and part of me will still be here when I retire,” Salter said.

“I’m trying my best right now for these last few years to just give them everything I’ve got and hopefully when I leave part of me will still be here.”