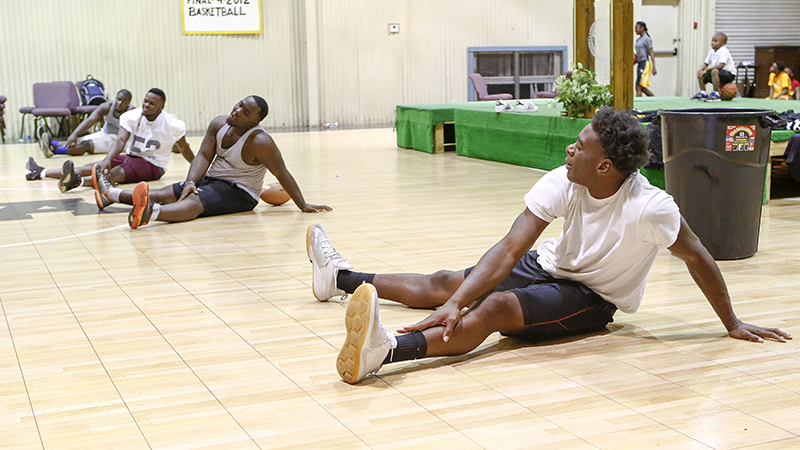 Ellwood Christian Academy Eagles football players get stretched in the gym for an indoor practice because of the bad weather.

The Ellwood Christian Academy football team was forced inside on its second day of football practice due to heavy rain.

In spite of the weather, the Eagles continued on with a light practice in the school gym.

Since it’s the first week of official practice, the team still hasn’t put the pads on just yet. Monday afternoon they practiced with just their helmets, and on Tuesday they were in T-shirts and shorts.

Before practice starts, the Eagles football players hit the weight room for 45 minutes to an hour according to defensive end/ tight end Jamel Phillips.

Phillips was visibly excited to be back at practice. He spent the summer working on his game and getting stronger.

“I picked up some new moves over the summer and got some good experience,” Phillips said. “Now that summer is over, I’m just ready to play.”

The Eagles are also changing their defensive style for the 2017 season with a five man front instead of the traditional 4-3 defense.

While practice is still in non-contact mode, practice has mainly consisted of going over the plays and working on their footwork and hands drills.

Fortunately for Stokes, he said most of his players from last year are returning so the learning curve will be minimal.

“All the guys that are starting played 90 percent of the snaps for us last year,” he said. “They’ll be pretty experienced and ready to play.”

That puts them in a much better position than they were at this point last year when a lot of the kids on the 2016 team had never played football before, according to Stokes.

Last year the team finished at the bottom of the Class 1A Region 3 standings with a 0-10 record.

The offense scored the least amount of points, 106, and the defense gave up the second most points, 466, in the region.

The team was shutout six times last year, and gave up at least 60 points on four games.

Stokes believes the team will improve this year because of the gained experience and extra work in the weight room.

“I basically have my same team coming back and we’ll be a lot better this year,” he said. “We’re just going to try and improve on last season.”

The Eagles open the season on the road against Wilcox Central High School on Aug. 25.