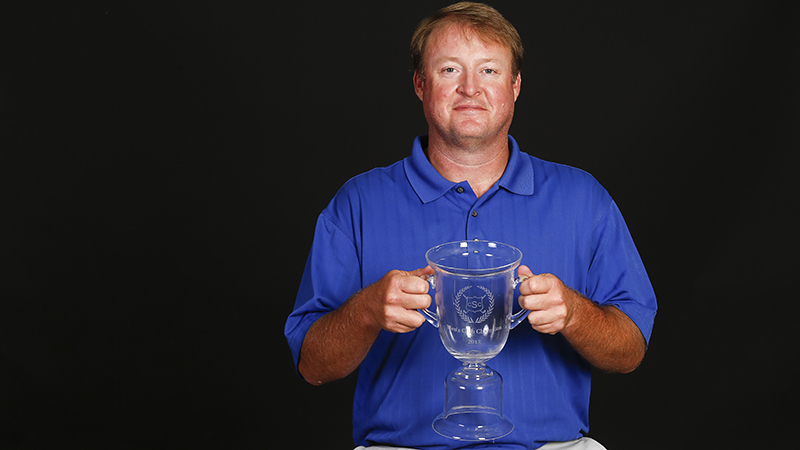 William Free holds the 2017 Selma Club Championship trophy, which he won this past weekend.

William Free took home the trophy as he was the winner of the 2017 Selma Club Championship this past weekend.

Free, who averages a 67 on the Selma Country Club course, shot a 69 to win the tournament.

“I wasn’t for sure I’d won until I got up there, so that was pretty cool,” he said.

The two-day tournament began this past Saturday and more than 30 players participated in the event.

After the first day of play, Free was tied with Bob Frazier. Free had never won the tournament before and wasn’t expecting this year to be any different.

On Sunday, Free bogeyed on the 16th hole to start the day and gained some early confidence.

Rumors of an impending storm threatened to end the tournament early. In which case, Frazier would have taken home the trophy.

Even though the players were able to continue on Sunday, there was a rain delay that stopped Free while he was half-way through his final set of holes.

Free had been playing well, but it wasn’t until he realized that he was in the hunt for the championship that he started to think about it.

“With five holes to go, I had gotten my score to 4-under, and that’s when I really started to get nervous.” Free said. “I really thought I had a chance then.”

William had every reason to be nervous in the company of some of the better golfers at the Selma Country Club.

“The second day I was worried about Bob, Donnie Blanton and Paul Garner,” Free said. “I was also worried about my son Jones Free who finished in third.”

The club’s best golfers were competing and William, who has never come close to winning the Club Championship before, was in the hunt.

“That game of golf was very nerve wracking,” he said. “It’s just all the good golfers from the club that play there all the time. They’re really good and everybody knows that course so well.”

Blanton was the second-place winner and Garner has won the championship multiple times in previous years.

Jones Free, 14, shot a 64 on the course the Friday before the tournament officially started.

In his first time competing in the adult division, he finished the tournament in third place with a score of 72. William says he and his son play together about once a week, but Jones plays nearly every day.

“I was worried about him shooting a real low number, but I was able to pull it off,” William said. “He was trying to get in my head at church on Sunday because he wanted to beat me so bad.”

As the pressure mounted, Free bogeyed the first two of his last four holes.

He finished with a score of 69 by making par on his final two holes.

Free knew luck was on his side when he hit two shots through the trees after the rain delay that worked out in his favor.

“It felt really good. I’ve been playing good this year, and I couldn’t believe I won beating Donnie Blanton and Paul Garner,” he said. “It just happened to be my day. I was making the putts, which is probably not my best thing, but that day it worked.”