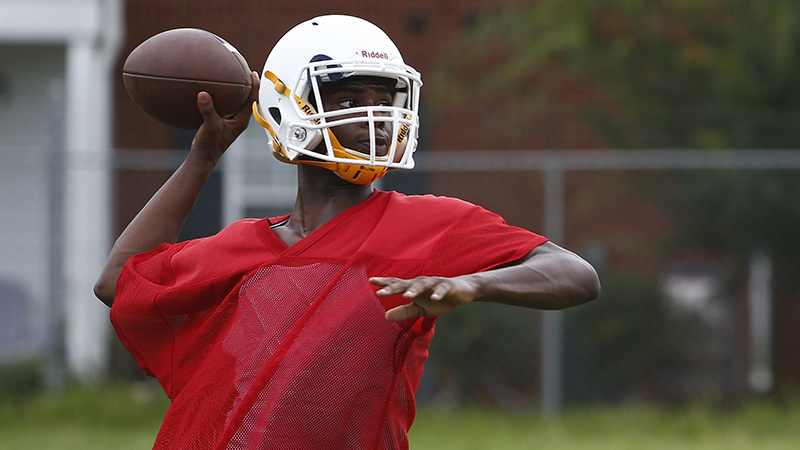 Tyreshon Freeman took the reps at quarterback for the Saints first practice.

The Selma High Saints were in helmets only for the first practice of the school year.

Monday was the first day that public schools were allowed to hold official practices.

The players came out ready to play and were excited to be back on the field.

“They’re asking for shoulder pads and helmets right now,” new head coach Christopher Raymond said. “They’re ready to be fully dressed, but the thing about it is we’re going to try and get better day by day.”

The temperature was in the mid-80’s throughout practice with decent cloud cover. Even that was enough to have a few players showing early signs of fatigue on the first day back.

According to Raymond, conditioning is one of the key items that needs to be addressed before the season starts.

“We know we got to get in condition,” he said. “It’s going to be hot on Aug. 25, and there’s no need to come out here worrying and complaining about it being hot.”

The conditioning will also help the team adjust to their new coach’s style of play. Raymond says he plans to use multiple fronts and formations, and he’ll need his players to fit his style.

Even though coach Raymond plans to ease the team back into pads, he still had his players going full speed in non-contact drills. After a brief conditioning session to loosen up, the players split into their position groups for drills.

The Saints will face the challenge of overcoming their second coaching change in as many years. Last year, the team finished 1-9 and allowed 35.6 points per game to their opponents. Now Raymond, who has previously coached at Dallas County, Keith, Southside and for Sumter County, will be charged with getting the Saints ready in a short offseason.

Raymond was hired this past June and is in the process of evaluating his new players. The Jamboree is scheduled for Aug. 25, and he has already communicated to his players that starting spots won’t just be handed out.

“I just want to see if the kids understand what they’re doing,” Raymond said. “I don’t care if it’s a ninth grader, 10th grader, 11th grader or 12th grader. My philosophy is that we are going to play the best kid for the job.”

There will be multiple position battles ahead to determine who will be this year’s starters.

After day one of practice, the Saints are back in football mode and will be counting on their new leader to help them improve upon last year.

Now that practice has officially started, the real work can begin.