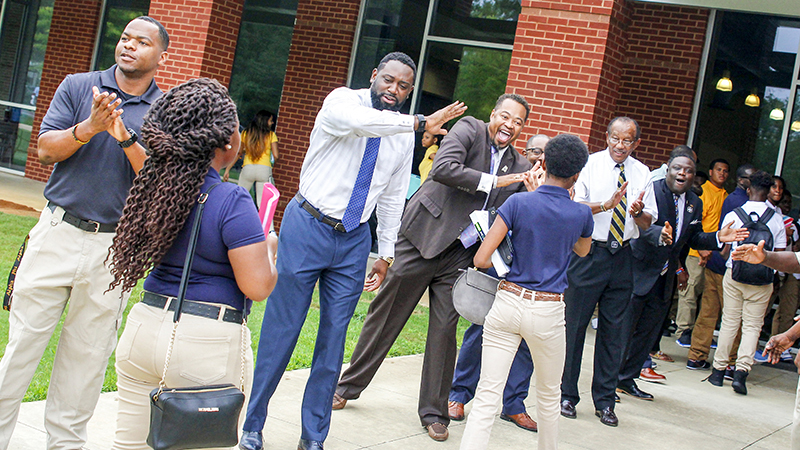 Selma High School students were greeted in style Monday morning with high fives and pats on the back from the 100 Black Men of America Selma chapter.

As students made their way into the cafeteria for the first day of school, they had to work their way through a line of smiling faces.

“What we wanted to do was to get the students encouraged and inspired,” said attorney Billy Young. “We want to let them know that the community is behind them, especially the men. There’s a lot of talk about the need of inspiration for our children. So we think we can provide inspiration by letting them know we’ve got their backs.”

This is the second year the 100 Black Men of American local chapter, which was founded in 2015, has come out to greet students on the first day of school. Last year the group welcomed students to Tipton Middle School.

The chapter had a couple of supporters join them, including one woman, Annie Towns, who runs a ministry called Outreach Teen Fellowship.

“If I know of anyone going to greet or a prayer meeting, then I’ll come over,” said Towns, who is organizing her annual event for students the first Saturday of October.

Selma High School seniors had an even more special return to school.

Several class members met at  Tabernacle Baptist Church for a prayer by pastor Dion Culliver and then were escorted to the high school by Alabama State Troopers and the Selma Police Department.

Senio Trooper Reginal King with the Alabama Law Enforcement Agency said the event called “Campaign Arrive Alive” was about warning students about the dangers of drinking, drugs, speeding and texting while driving.

“If we have 200 seniors, we want to graduate 200 seniors. We do not want to lose one — not the first one to a traffic fatality,” King told the senior class. 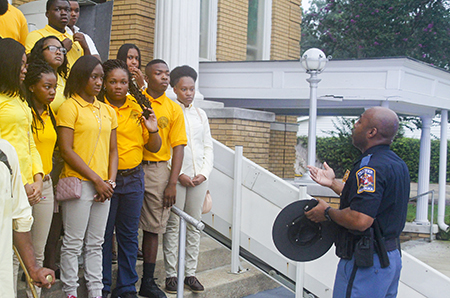 So far this year, ALEA has investigated 362 traffic fatalities across the state. King told the class that 58 percent of those killed were not wearing a seat belt.

“Our message to you today is it doesn’t matter how short the distance. We need you to buckle up each and every time,” King said.

Capt. Johnny King also talked to the students on behalf of the Selma Police Department.

“This is the best time of your life. You have the opportunity to be anything that you want to be. But it starts right here. I want you to take this next year and get your education,” King said.

After the talks from law enforcement officers, the students hit the street in a long parade of cars down Broad Street.

There was even a small group of parents and family members cheering when they arrived to the school, where they had special parking reserved.

“It’s my last first day of high school, and I want to remember it,” said senior Shameerica Watts. “These are my classmates and friends. It’s great that the police officers will come talk to us tips about being safe driving.”