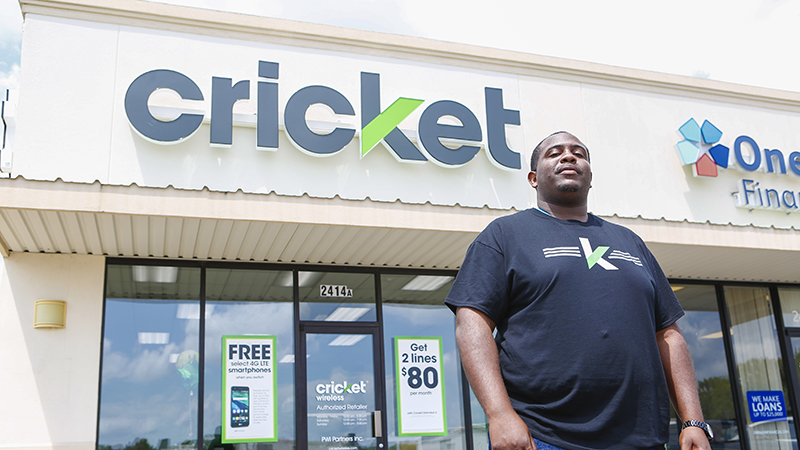 ricket Wireless store manager Donneil Ford is shown outside the business, which is located on Highland Avenue near Walmart. Cricket is owned by AT&T and is a prepaid wireless service provider, offering voice, text and data.

“We are extremely excited to be part of the community,” said store manager Donneil Ford. “We felt as though this market needed a new cell phone provider.”

Ford said customers have upgraded and transferred to cricket in their first week of business. The store is located on Highland Avenue near Walmart.

“It’s very exciting to meet the faces of new customers and we get to interact with them … and make them feel welcome,” Ford said. “We’ve had a lot of foot traffic so far.”

Ford says there’s a Cricket Wireless store in Montgomery and one in Prattville, and the company noticed many customers from Dallas and Lowndes County.

“They have a lot of Cricket customers that come from the Lowndes County and Dallas County area, so we thought instead of our customers having to drive all the way to Montgomery or Prattville that we should open up a local office here,” Ford said. “We’re looking forward to providing a great service to the community while offering wonderful, great plans and specialty deals.”

Ford said the first week went great, and he and his staff have been out in the community trying to let people know about the store and what they have to offer.

“We are extremely excited. We are hitting the streets every day handing out Cricket brochures letting people know that we’re here in Selma.”

Ford said he hopes to have the grand opening in late September or early October, but plans have not been finalized.

Cricket began in Chicago in 1999 by Leap Wireless International, Inc. AT&T, Inc. agreed to acquire Cricket’s parent company for $1.2 billion in July 2013. The merger was approved by the Federal Communications Commission in March 2014.

Wi-Fi announcement made at River Rally