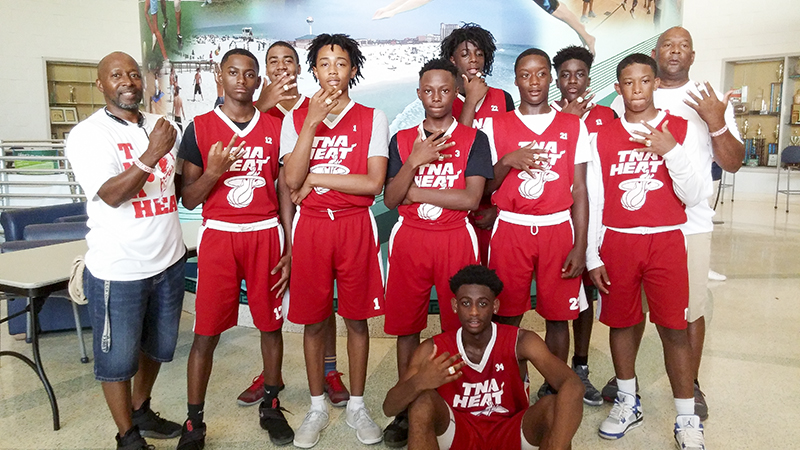 The girls traveled to Navarre, Florida, and finished in second place at the Navarre Coast Classic on July 23.

The girls were 1-1 in pool play. They lost the first game 29-22 to the SYSA Tigers, and then defeated the Wiregrass Wildcats 45-13.

As the second seed, the TNA Heat girls defeated the Wildcats again 25-13 in the elimination round. The win propelled them to the championship game and a re-match against the SYSA Tigers.

Unfortunately, the girls were unable to avenge their pool play loss. They finished the tournament in second place after the 30-18 loss.

Head coach Letti Hasberry was proud to see how much her middle school girls team has grown over the years.

“They have improved since I started working with them, and I’ve had some of the girls since they were in like fourth grade,” Hasberry said. “I was proud of the outcome regardless of whether they placed or not.”

This was the second tournament the girls played in this summer where they finished in the top three.

But they were more excited this time because they received medals from the Navarre Coast Classic, according to Hasberry.

The seventh-grade boys earned the No.1 seed in the End of the Summer Showdown by going 2-0 in pool play.

They defeated team PCBC 48-34 and the MCS Chaos 56-22 this past Saturday. They were awarded with a first-round bye in the elimination bracket.

The team faced PCBC again in the semi-final round, but they were unable to beat them again.

The Heat finished the tournament in third place after the 40-28 loss.

The eighth-grade boys went on a run of their own in Pensacola.

They also finished at the top of their pool with a 2-0 record and a substantial point differential. The team scored 87 points during pool play while only allowing 47. They defeated Ballerslife 41-21 and team Pace 46-26.

In the elimination bracket, the boys defeated the Lightning, 52-37. In the semi-finals, the Heat beat the Gym Rats 49-39 to advance to the finals against MS Elite.

Even though the tournament page hadn’t updated the championship score, the rings they earned show that they won the End of the Summer Showdown championship.

Nathan Ellis, coach of the boys teams, was proud to see the way his teams competed against the quality competition they faced in Florida.

“It’s a great feeling,” he said. “It’s not really what we expected. This being the End of the Summer tournament and great teams were there.”

Ellis knew his team was among the great teams and says he reminds his boys “to beat the team that’s on the floor.”