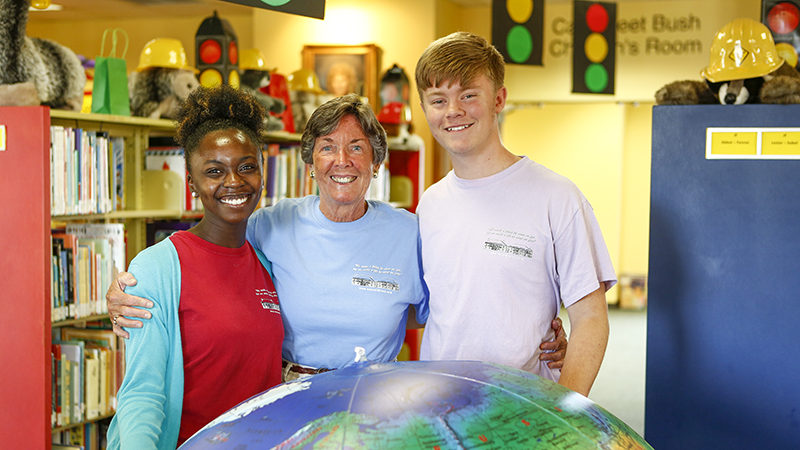 Student assistant Rykia Henry, Selma and Dallas County Library executive director Becky Nichols and student assitant Colby Whitaker pose for a photo Tuesday with a large globe that has been hanging inside the library’s children’s department over the summer.

The Selma and Dallas County Public Library wrapped up their summer reading programs by going through children’s submissions on how to create a better world.

The library’s summer reading program was themed “Let’s Build a Better World Together,” and children were asked to answer a prompt on what they would do to make the world a better place.

“We’re all building a better world together every single day in everything we do,” said Becky Nichols, library director. “I think in most things we don’t give our children credit for creative thinking. We give them art lessons and piano lessons and want them to play baseball and football and all that good stuff, but when you ask them what they think about something, you get amazing responses.”

“I was just surprised at how many we got from each age group,” said Colby Whitaker, a student at Morgan Academy and summer student assistant.

Whitaker said one of the answers that stood out to him was out of the 6-8-year-olds.

“There were some that I really didn’t know that kids thought about. Like in the 6-8-year-old division, it said something about planning a produce garden,” he said. “They were also thinking about the trees and the environmental state of things. I thought it was interesting that 6-8-year-olds were thinking about that.”

Whitaker said responses from all ages groups suggested picking up litter, cleaning up the city and helping the homeless.

Rykia Henry, a student at Auburn University Montgomery who also helped at the library this summer, said children wanting to help the homeless stood out to her.

“I really like how we had children that believed that we should have homeless shelters and places for the homeless to go eat. That’s really good to hear a child say such things,” Henry said. “To hear them say these things at such a young age, that’s really great.”

In the children’s department of the library, a large globe hung from the ceiling. Kids were able to go up to the globe and look around at the different continents and countries.

“I think this is the first time that our children have realized that this is a big, big world, not just a small place called Selma, Alabama,” Nichols said. “The benefit that we get at the library is bringing all of the kids together of all ages and find common ground.”

“Here at the library, you see children who just come and they get to interact with children of different ages, different ethnic groups, and they just become friends,” Henry said. “Just seeing them be able to come together as one, not looking at color, any of that, it brings joy because that’s how they’re building a better world.”