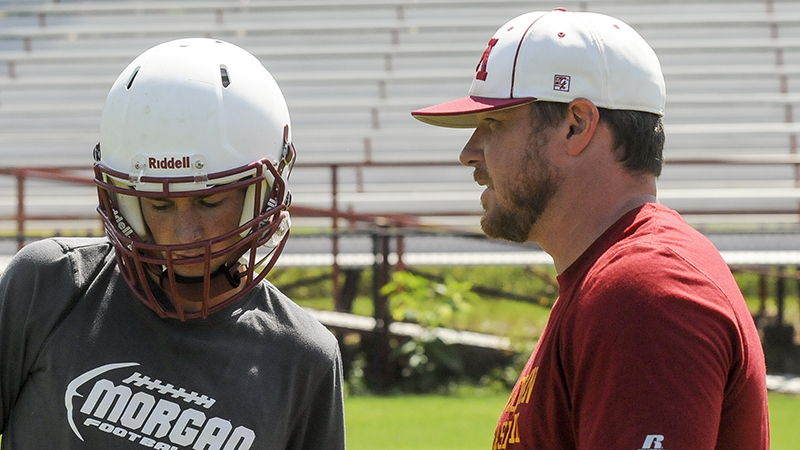 The Senators are the first team to hold an official practice this year. After a summer of workouts and seven on seven camps, both the coaches and players were excited that football season is officially back.

The players were on the field and ready well before head coach Josh Thacker’s first whistle.

“It’s always a fun time for these guys,” Thacker said. “We’re excited to see how it all is going to fit together.”

Some players were throwing the football around and others simply hanging with their teammates as they waited for practice to start. Most of them already had their helmets on and strapped while they were only standing around.

“We’re very excited. We had a great summer,” assistant coach Seth Currie said. “Coach Thacker took our skill guys to seven on sevens, and they performed well. Hopefully, that will carry on throughout the season.”

Once that first whistle went off, the team headed to midfield, and football season officially started.

In just helmets and cleats, it’s still too early to run a full speed practice. The first team offense ran through a light series of plays against the defense before switching out with their substitutions.

“Our energy is good right now,” Currie said. “This being the first practice, you want to have high energy.”

Thacker kept it simple and conferred with his quarterback before each play. He had one of his managers filming from above the stands to record each play.

Running back Sam Brackin was just one of the players excited that football season is back.

Brackin’s 2015 season was cut short by a torn ACL, so he’s missed more football than his other teammates.

“It’s nice to get back into football,” he said. “I’ve been rehabbing hard, so I’m looking forward to my senior year.”

Last year, the Senators ran a wing-T style offense according to Currie. Now they have transitioned into a spread offense to help move the ball.

The defense setup different looks for the offense to read, and practice their new scheme against.

“We’re in the middle of an offensive scheme change from last year into something I’m a little more comfortable with,” Thacker said. “It’s kind of an overhaul of what we’ve been doing.”

The first practice had its ups-and-downs according to Thacker, but he said he was generally pleased with his teams’ first showing as a unit.

It’s going to be a long season, but the Senators are in good shape as they have gotten a head start on practice.