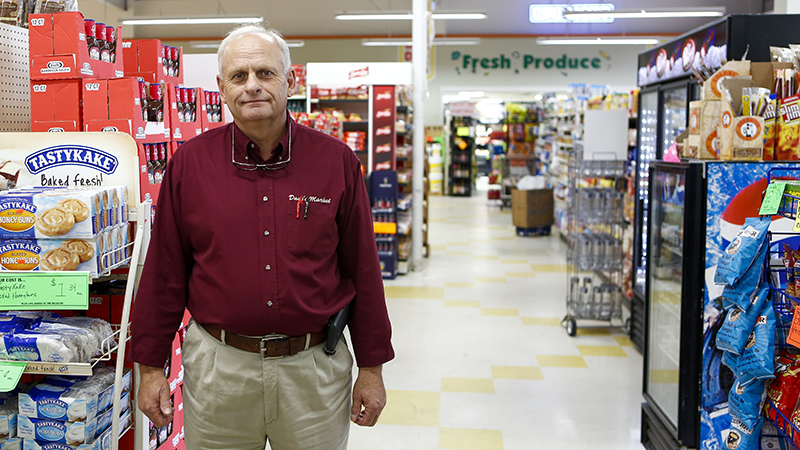 David Oliver is shown at Dave’s Market, which has been named one of Alabama Retail Association’s Retailers of the Year.

David Oliver has owned Dave’s Market for seven years now, and his hard work has now earned a major honor. The store was recently named as one of the Alabama Retail Association’s Retailers of the Year for the $5 million through $20 million in annual revenue category.

Sheryl Smedley, executive director of the Selma and Dallas County Chamber of Commerce, said it’s a tough competition, and she’s excited for a local business to win in any category.

“It’s a very high honor,” Smedley said. “We’re a small town, rural community and competing against areas that the economic retail is much more flourishing than ours and it states that we’re open for business.”

When asked what made his store so great, Oliver said it’s all of his employees and the work that they put in to give the customers the best experience possible.

“The employees … are all friendly, they do their jobs,” Oliver said. “I wouldn’t be where I’m at if I didn’t have good employees.”

Oliver said his employees are the best part of his store, but another positive is the prices.

“It’s a cost-plus 10 percent. Everything is at our cost, and 10 percent is added at the register,” Oliver said. “They get everything cheaper here than they do anywhere else.”

Smedley said it’s important for the town of Valley Grande to win the award because it shows that they too have great places to shop.

Oliver said he hopes people that may not have been in the store before will see that they have won the award and decide to step in and see what they have to offer.

“Maybe they’ll see that we’re a good place to shop, the ones that haven’t been here,” he said. “Try it and see.”

Oliver and Smedley will attend a banquet in Birmingham on Oct. 17 to find out if the store won the bronze, silver or gold award.

Oliver said he is excited to go and bring the award back home.

“It’s the first time I’ll have been so I’m looking forward to it,” Oliver said. “A small town gets recognition.”

Buddy Swift with Swift Drugs was awarded the Centennial Award in 2016 for being in business 100 years, and Chet Chappelle with Rountree Outdoors was awarded as a retailer of the year in 2015.

Other Selma and Dallas County stores have also won awards from the association over the years.

Facebook contest will decide which athletes grace cover of…