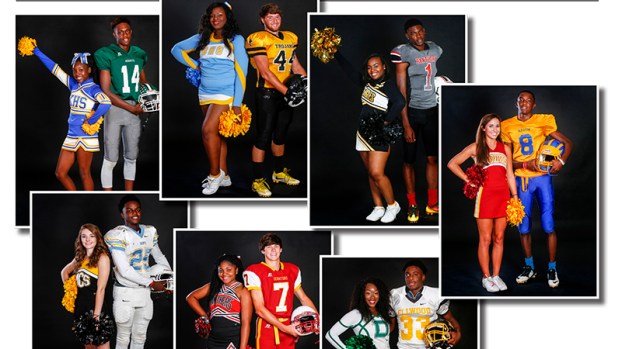 The contest to decide who will be on the cover of this year's edition of Gridiron will begin Monday morning and go through Friday at 5 p.m.

Facebook contest will decide which athletes grace cover of Gridiron 2017

The 2017 Gridiron football preview magazine is coming out soon, and The Selma Times-Journal needs your votes to select this years’ cover athletes.

A football player and cheerleader from each high school in the Selma/Dallas County area have been paired up once again for a chance to be on this years’ cover. More than 5,900 total votes were cast during 2016’s contest. Meadowview Christian and Keith won the contest with more than 1,300 likes on Facebook.

This year, the Times- Journal has scrambled up the schools again and the pairing with the most votes will be on the 2017 cover.

“This is a fun way to engage the community, and get everyone excited for football season,” Times-Journal sports reporter Thomas Scott said. “It’s exciting to see how much support the football players and cheerleaders have behind them.”

Voting for the Gridiron photo cover contest begins Monday, July 31, on Facebook. Votes will be counted by how many “likes” each photo receives.

Liking the photo album will not count as a vote for the student athletes. Shares and comments do not count as votes either.

The contest will last for a week and the match-up with the most “likes” will be on the cover of this years’ edition which will be issued in August.

The other participants will be highlighted inside the magazine.

Go to The Selma Times-Journal’s’ Facebook page to place your votes and support your student athletes.

Registration for the Club Championship golf tournament at the Selma Country Club will close at five o’clock in the afternoon... read more