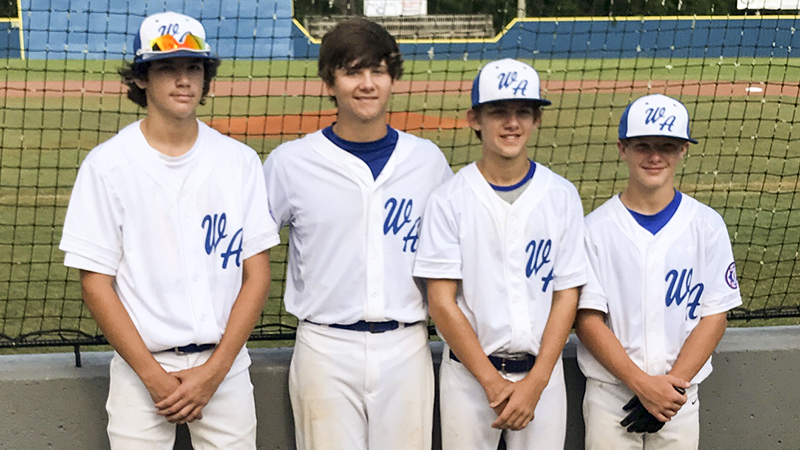 In its first year in the Babe Ruth league, the Meadowview Christian School summer baseball team had four players selected to the West Alabama all-star team.

The All-star team took kids from a pool of six teams in the district, and selected Garrett Brech, Jeremy Lee, Chase Macomb and Chambers McGilberry from Meadowview Christian to compete in the state tournament this past weekend in Childersburg.

Meadowview Christian coach Scott Gunter told the boys they were chosen after their last regular season game and said they were excited to play more baseball.

“They didn’t have to go if they didn’t want to, but all of them wanted to go,” Gunter said. “They deserved it.”

The boys impressed coach J.A. Morrison, head coach of the West Alabama all-stars, who had limited chances to see them play before selecting them.

“When I saw them play, I felt excited about having those four kids,” he said. “I just saw four kids that never quit and always gave 110 percent on everything they could do.”

Brech pitched for the all-stars in the state tournament. Lee pitched and played both shortstop and third base. McGilberry patrolled the outfield and Macomb was clutch off the bench and played second base as well.

“Jeremy Lee, he really showed out and carried our team. Garret Brech, he gave everything he had on the mound, and I couldn’t be prouder of him,” Morrison said. “Chambers McGilberry, we felt comfortable wherever we put him in the outfield. Chase Macomb, even though he started on the bench, when we subbed him in he came out there and gave it all.”

West Alabama rebounded from an opening round 7-2 loss to Tallassee and won their next three games in pool play.

Lee and Brech held their own on the mound in an 11-8 win against Atmore on Friday. Lee started the game, but was relieved by Brech after two innings when he told coach Hunter his arm was hurting.

The team defeated Wetumpka 10-0 and Covington County 5-3 in Saturday’s games.

At the end of pool play, West Alabama earned the No. 3 seed and was scheduled for a re-match with No. 2 Tallassee.

In the championship round on Sunday, West Alabama was unable to get their revenge in a tough 4-2 loss to Tallassee.

“If we didn’t have the four Selma kids, we wouldn’t have gotten where we were as a third seed playing for a championship,” Morrison said. “I’m so glad that I was able to have them.”

Not only did the boys from Selma play a big role in helping the all-star team compete, but they also created new friendships and a bond with their new teammates from Demopolis, according to Gunter.

“The boys did good and we had a good experience,” Meadowview Christian School assistant coach Darren McGilberry said. “I’m proud of them for working hard, making the team and representing the area and our school well.”

“This is the first time we’ve had a summer team that’s comprised of our students,” Darren said. “First time it’s been school affiliated, basically.”

The regular season team was comprised of 14 kids between ages 13 and 15. They competed against three teams from Demopolis, a team from Camden and Grove Hill. They finished the regular season with an 8-2 record.