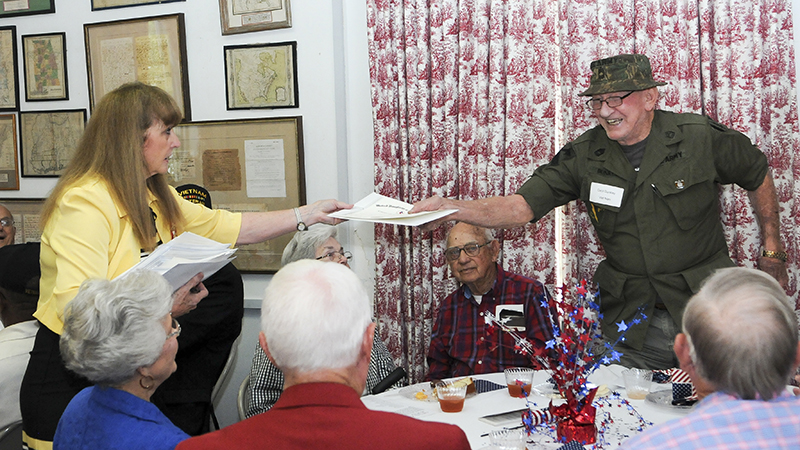 Pat Godwin, president of the UDC, presents Cecil Dunkley with a certificate of appreciation at the United Daughter of the Confederacy’s veterans’ reception Wednesday.

War stories echoed off the walls of the Vaughn Smitherman Museum as veterans from World War II, the Korean War and the Vietnam War gathered to be honored.

The United Daughters of the Confederacy hosted its sixth annual veteran’s reception Wednesday.

Pat Godwin, president of the Selma chapter of the UDC, was excited to see so many people come out be recognized for their service.

Godwin has been a member of the UDC for 27 years, and she has served as president since 2007.

Her dedication to the organization comes from a personal connection.

Godwin said that the main goal of Wednesday’s event was to let veterans know they are appreciated while they are still with us.

“It’s just important that we honor these people while they’re still alive,” she explained.

Godwin said the veterans always have a good time at the event.

“When they come here, even though not all of them know each other, they have a great common bond with each other,” she said.

The reception featured a moment for any veteran to share a story from their service to everyone in the room.

Veterans from three different wars told their tales of combat, training mishaps and even some Dallas County connections they made while on tour.

Willie Tatum, a Vietnam veteran, was excited to attend the reception to be honored.

“Well, it means a lot because when we returned from Vietnam, it was like people didn’t understand that it wasn’t a war we wanted to be a part of, but we were just following orders,” Tatum said. “When it was over we came home to no fanfare, course that wasn’t why we did it anyway, but even today just to have someone come up and say thank you for your service means a lot even after 50 years. It makes the veteran feel good that you appreciate his service. There’s not much to it than that.”

Tatum joined the military with hope to further his education and learn a trade. During his service, he completed two tours of service in Vietnam.