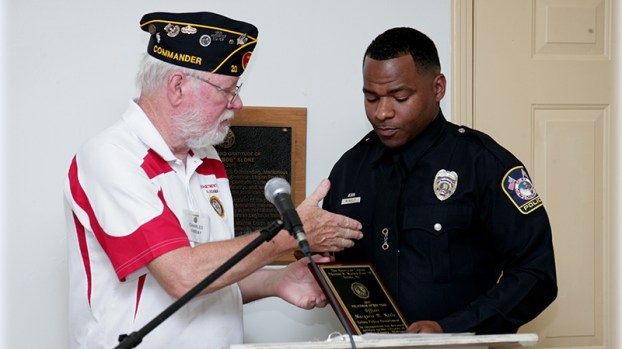 Legion recognizes SPD’s Neely as Officer of the Year

Neely has been in the Army National Guard for nearly 12 years and the police department for almost six years, and said he was thankful to receive the award from veterans.

“Because the American Legion is a veteran organization, it meant a little bit more because I’m in the military myself, so I can relate to those guys who went overseas,” Neely said.

“For them to recognize someone from the community that’s in the military meant a little bit more to me.”

Neely said even though he was the one being honored, he felt like he needed to thank the veterans for their sacrifices.

“When I actually received the award, all I could think about was actually thanking them for what they’ve done,” he said.

“They got this organization together and they felt enough that a group of people that have served in the armed forces for a nation, should honor somebody in a municipal setting for the small things that they’ve done in the community.”

Growing up with just his dad, Tory Neely, Mark said he never really told him good job or that he was proud for just making good grades. Although at the time, that hurt his feelings, he now realizes that the sternness helped him to realize that he should always try to be his best without looking for the praise.

“Throughout school, when I would get awarded for good grades … he never told me he was proud of me or good job. I felt like I was just supposed to strive for the best without anybody having to tell me good job,” Mark said. “Now, I’m more appreciative of him doing that. I don’t feel like people have to tell me good job for me to do well. I should want to do that for myself and the people around me.”

Although he wasn’t looking for the praise, Mark said it still felt really good to be honored by the Legion.

“When you get recognized as officer of the year … you kind of feel like you appreciate them for even recognizing what I’m doing,” Mark said.

“An award like this coming from the American Legion, it just goes to show you that people are paying attention to the positive things that you’re doing in the community.”

Overall, Mark said he is just looking forward to doing an even better job in the community and living up to his new title of Officer of the Year.

“It’s a good feeling for somebody to tell you that,” Mark said. “It’s an even better feeling when you do it out of the kindness of your heart or you do it because it’s the right thing to do.”

Tim and Vickey Letson visited the Napa Valley ten years ago and the idea came to them to turn part... read more