Raft Race will return in original form after being granted permit 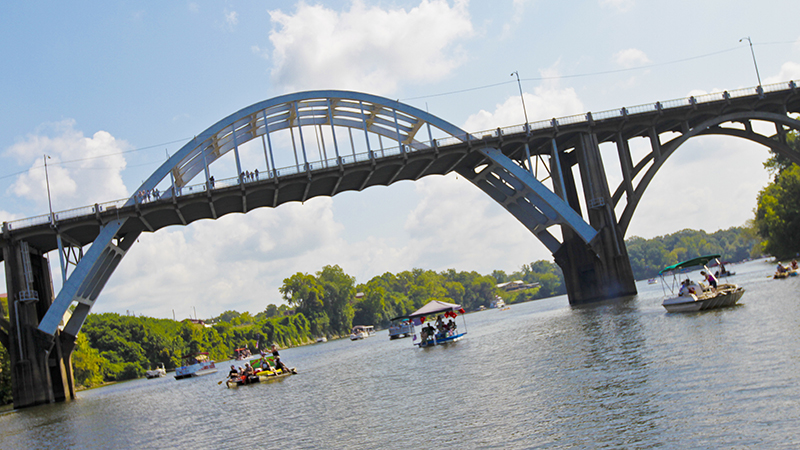 The 2017 Alabama River Raft Race will look a lot like the 2015 version as organizers have been granted a permit for homemade rafts by the Alabama Law Enforcement Agency. Last year, only canoes and kayaks were allowed.

The best part of the 2017 Alabama River Raft Race will be returning this year.

The race has been approved by the Alabama Law Enforcement Agency for homemade rafts after having to hold last year’s event without them. After a nearly two-decade hiatus, the race was brought back in 2015 with homemade rafts, but couldn’t get approval for them last year. Instead, it was held with canoes and kayaks.

Carmichael said organizers have spent the last few months working with ALEA to ensure that homemade rafts could be used this year. The race will be held Sept. 4 on Labor Day.

“It’s something that brings people downtown to watch it. It’s a really good event. It’s something everybody can get behind. It’s relatively inexpensive because you can make stuff out of scrap that will float,” Carmichael said.

In 2015, 24 homemade rafts and 12 canoes took part in the race, but the event had only 20 racers last year in a smaller field. This year the race hopes to pick back up the momentum it had in 2015, when big crowds watched from the Edmund Pettus Bridge.

The race has always been a fun, family event. Many of the rafts have funny designs or names, while others are comical, but also efficient at getting across the water. Al’s Towing won the homemade rafts event in 2015.

“People have fun getting their team together and hanging out and working with projects and putting it in the water and letting it race down the water,” Carmichael said. “From a spectator point of view, people like to see how others have built their rafts and people like to put stupid or silly or funny things on the rafts and so that draws attention.”

Carmichael said he’s already hearing from a lot of people interested in this year’s race. The post on the Facebook page for the Alabama River Raft Race had multiple shares within only a few hours of the news being announced.

“I just created an event on Facebook and before I was done creating the event, there were 10 people already going,” Carmichael said.