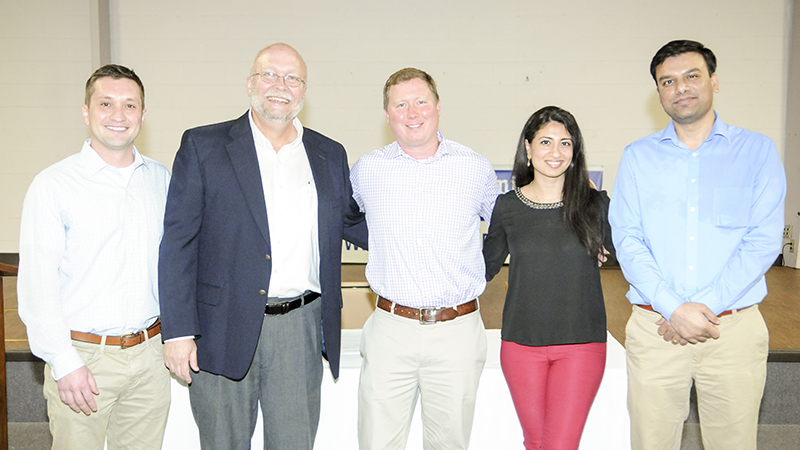 UAB Family Medicine resident doctors who have volunteered at the Doc In A Bus program were highlighted during the United Way’s annual banquet Thursday. Five doctors will finish their residencies in June and are shown above with local United Way executive director Jeff Cothran. Shown left to right are Daniel Pirvan, Cothran, Matthew Price, Zonah Kapadia and Vihang Soni. Jones King is not pictured.

Supporters of and those helped by the United Way of Selma and Dallas County gathered Thursday to celebrate the work the nonprofit does in the community.

The United Way awards more than $220,000 in annual grants to its partners like the American Red Cross, the YMCA, the Salvation Army, the BOSCO Nutrition Center, West Alabama Easter Seals, the Selma Area Food Bank and others.

“These are things that are happening in our community, positive good things, and I shudder to think what our community would be like without these wonderful agencies and without these great services,” said Jeff Cothran, executive director of the United Way of Selma and Dallas County.

This past year the United Way was also able to fund several major projects thanks to a gift from an anonymous donor. Those include helping Arsenal Place with renovations at its business incubator, Grow Selma purchase property for its community garden and the YMCA finish its youth soccer fields.

Cothran said the evening was also a time to thank those who support the United Way.

“We are here tonight to appreciate that moment and also appreciate all the great companies and contributors we have that makes this all possible,” Cothran said.

Several companies were honored for their support, including International Paper Riverdale Mill, whose employees provide about 45 percent of the United Way’s funding annually.

The United Way’s second largest contributor, Hyundai Manufacturing, was highlighted as well as Alabama Power Company, which had 100 percent of its employees contribute to the United Way this past year.

Cothran also praised the United Way’s Doc In A Bus program, which allows low income residents or those without health insurance to see doctors who volunteer their time.

Many of those doctors are residents at UAB Family Medicine, which will see five students finish their residencies this spring. Those five doctors, Daniel Pirvan, Matthew Price, Zonah Kapadia, Vihang Soni and Jones King were thanked for their work with Doc In A Bus.

The speaker for Thursday night’s banquet was Jerria Martin, a minister and executive director of Drug Free Communities of Dallas County. Martin talked about the history and founding of the United Way and the importance of people coming together for the common good.

Teacher of the Week: Denson wanted to coach early