Selma girls roll past Benjamin Russell and into Central Regional 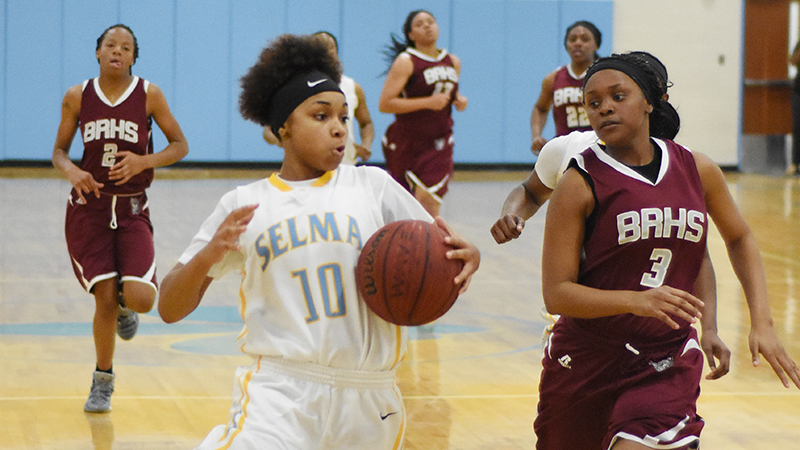 Selma’s Jamya Smith jumps for a layup during Monday night’s game against Benjamin Russell. Smith scored 23 points to lead all scorers in the game. --Daniel Evans

Jamya Smith made six 3-pointers and added an old fashioned 3-point play Monday as Selma doubled up Benjamin Russell 68-34 in a sub-regional playoff game. Selma will move on to play Helena in the Central Regional in Montgomery Friday at noon.

“They did a good job. We didn’t have but nine turnovers the whole game. We executed well,” said Selma coach Anthony Harris.

The Saints scored the game’s first eight points and led the entire way. Smith made three first quarter 3-pointers to give Selma an 18-6 lead after the opening period. Smith had 23 points to lead all scorers.

“I told her this is your last ballgame in this gym. Leave everything in this gym,” Harris told Smith and the other Selma seniors. “You’ll come back to practice, but you won’t play here no more.”

Smith and Tashaari Grimes each made a 3-pointer on back to back possessions to start the second quarter, upping Selma’s lead to 24-6. Grimes joined Smith in double figures with 11 points.

The lead kept growing from there. Kynadra Lewis made two layups in the final minute of the first half and the Saints led 38-12 at the break. Lewis also had one of the highlights of the night when she spun through two Benjamin Russell defenders, made a layup and got fouled in the first half.

The entire Saints’ bench stood and yelled, as did most of the Selma fans in attendance.

Selma continued its dominance in the second half, leading by as many as 37 in the final minutes.

Eight Selma players scored in all in the game, including freshman Za’miyah White, who made a turnaround jump shot in the fourth quarter.

“I’m proud of them and we’ve stamped our ticket to the regional,” Harris said with a smile.

After the game, Harris talked to the team about what it’ll take on Friday for Selma to win again. Usually reserved, he finished his speech with a loud yell of “how about those Saints?”

Benjamin Russell (13-11) saw its season end with the defeat. Hope Westbrooks led the Wildcats in scoring with 11 points, with all of them coming in the second half.