Deputies certified to use drone in search and rescue 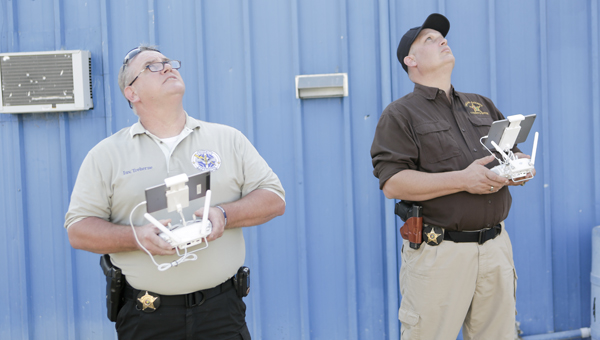 The Alzheimer’s Outreach Group donated a drone to the Dallas County Sheriff’s Department back in July, and on Thursday everything finally came to flight.

“I’m very excited. This is huge, especially for us to have one and be the first in the state to have one given to us like this,” said Sgt. John Treherne with the sheriff’s department. “It helps us with the productivity of the project Lifesaver program to encourage people to get on board with it.”

Treherne and Deputy Scott Haskell have finished training to be certified to fly the drone for the department.

“I’m very thankful,” Treherne said. “This is probably the best training I’ve had in my 23 years.”

The drone will be used for search and rescue, especially those who may wander from Alzheimer’s or autism.

“This being able to get up in the air and having a view of the whole area instead of trying to walk … we can pick up a larger area with the camera and makes it easier to locate,” Treherne said.

Phil Owen, director of operations at enrGies, a drone operation, training and repair company, led the deputies through the four-day training.

“We talk about the characteristics of the airplane, what it can do what it can’t do, and then we come out and do actual hands on flying,” Owen said. “This gives the sheriff’s department an opportunity to actually see it, talk about it and understand how it can be use and how it can’t be used.”

“It’s a much easier way, rather than putting someone out on foot, to find somebody,” Owen said.  “If you have someone that’s lost and you think he’s in the woods somewhere, you can fly this right over the top of the trees.”

Oscar Wayne Calloway, director of the Alzheimer’s Outreach Group, said it was great to see the drone in operation.

“AOG’s motto is keeping them safe while giving hope. And our hope of course is in the cure. But keeping them safe in the meantime, that’s what we’re working to do and we try to invest in whatever will keep our citizens safe,” Calloway said. “We’ve worked hard at this for months, and now it’s come to fruition. We’re excited we finally got here.”

Calloway said he is thankful for the Selma Lions Club, who let them use the fair grounds for the training.

Deputies from the Montgomery County Sheriff’s Office also participated in the training and graduated with the local deputies Thursday.

Roger and Dolly Butler and Doris Butler Truax pose for a photo at the front of Butler Truax Jewlers Wednesday... read more