All-Stars given hero’s welcome on return 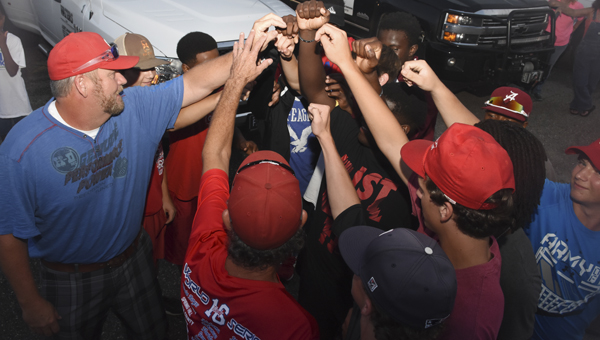 Selma’s Dixie Boys All-Stars returned to town Tuesday with a welcome from the Selma Police and Fire Departments and other community members.

Selma’s Dixie Boys baseball team came just short of a World Series championship, but that hardly seemed to matter to Tuesday night. The team returned home to a hero’s welcome, led by a police and fire department escort.

“When we were up there, I didn’t think anybody knew about us. I thought we were just up there and nobody knew we were doing good,” said Jeremy Lee, who pitched on the team. “We come back to all this and everybody is behind us. It’s awesome.”

The team was eliminated from the Dixie Boys Baseball World Series Tuesday night, following a 12-2 loss to Georgia. The team, which played at the 14-year-old age level, won two of its four games and was one of the last six teams remaining. The tournament was played in Pineville, Louisiana.

As the team played throughout the week, fans that couldn’t make the trip followed the games on Facebook and sent their support through social media. The players said they knew many in Selma were following their journey, but they didn’t realize how much it meant to the city.

“I didn’t think it would be anything like this,” said Joseph Estes. “I thought we were going to get back and go to our houses. I didn’t know this many people knew about it honestly.”

The Selma Police Department and Selma Fire Department picked up the escort as the team entered Selma and led the line of cars to Memorial Stadium, where a large group awaited the team’s arrival.

“It just shows that Selma has a great community and it can pull together,” said head coach Ricky Waters.

The team had an interesting ride home. The city van, which carried the team to and from Pineville, broke down near Jonesville.

While the team was waiting on a tow truck to arrive, they ate lunch and pulled out lawn chairs and sat beside the road. Waters said it didn’t faze them at all. The van was repaired within a few hours and the team started on its way home.

“They were wondering if they were going to get to miss another day of school,” Waters said. “We weren’t that far from the ballpark and they wanted to return to watch Enterprise play tonight.”

The team grew close with the Dixie Junior Boys team from Enterprise. The teams had a devotional together Monday and ate dinner together another night. Selma played back-to-back games on Monday, so the team didn’t get back to the hotel room until almost midnight.

Waters said the Enterprise team ordered pizzas and had them waiting for Selma when they arrived.

“My hats off to Enterprise because they were a classy team. That was first class representation of Alabama,” Waters said.

Both teams had a lot to cheer about. Enterprise was still playing in its tournament Tuesday, while Selma received the type of welcome reserved for champions.

Members of the Selma Police Department and fire department walked over to shake their hands and then led applause for the team. Others videoed their arrival and met them with hugs.

Before everyone departed, the team huddled together one last time and broke on “Thank you Selma.”

“This is a story of a lifetime for these kids,” Waters said. “These kids will remember this from now on.”