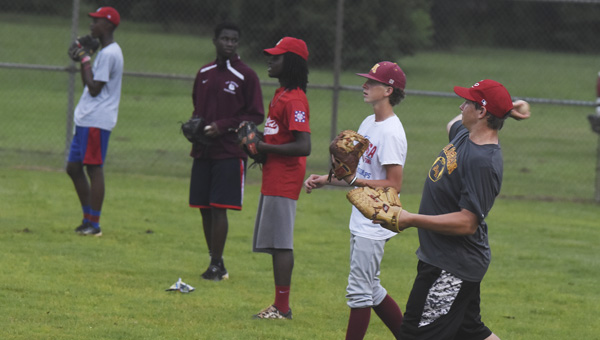 The Selma 14-year-old All-Star team warms up Tuesday night at the Complex. The team will play in the World Series Saturday in Pineville, Louisiana. -Daniel Evans

Every member of the Selma All-Star baseball team remembers where they were when they found out the team was heading to the Dixie Boys Baseball World Series.

Xavier Green was playing baseball in a travel ball tournament. Richard Alan Waters was relaxing at his house, but started jumping around when he heard the news. Milam Turner was in the middle of a shower and had to stop himself from running out the front door without his clothes on.

“Luckily I caught myself in time,” Turner joked.

It was clear at Tuesday night’s practice that the team, which is made up of 14-year-olds, appreciates the second chance they’ve been given. Selma lost back-to-back games to Enterprise last week in the Dixie Boys State Championship in Dothan and technically saw its season end.

At least that’s the way it was supposed to work out.  After beating Selma to win the state, Enterprise pulled out of the World Series in an effort to stay in agreement with the Alabama High School Athletic Association’s 50/50 rule, which regulates non-school teams during the school season.

By rule, if the first place team drops out, the second place team gets to play. Selma is planning to take advantage of the opportunity.

“I think we laid down in those last two games, but I feel like we’ve been revitalized with this news,” said Richard Alan Waters, whose dad Ricky coaches the team. “I feel like we are going to do some good things out in Pineville, Louisiana.”

Ricky was on the team when Selma last played for a World Series during the 1980s. Now, Richard Alan is carrying on the family name.

“It’s kind of crazy. It’s unreal to believe that the only time Selma has been to the World Series the father and son were both on the teams,” Waters said.

It’s been a busy week for many of the players on the team.

Waters, Turner and others have been going through three-a-day football practices at Morgan Academy and then participating in baseball practice in the evening.

Jeremy Lee, who plays football at Meadowview Christian, has been doing the same, although the Trojans are only practicing once a day. Octavious Palmer, who plays at Dallas County, said the coaches told him to spend the week preparing for the baseball tournament.

“It’s been tough but two more days, Wednesday and Thursday, and then we will be off to Louisiana,” Turner said.

Green is one of a handful of players on the team that was still playing baseball when he got word that Selma had the chance to play for the World Series.

“The day he told us we were going to the World Series, I had a game,” Green said. “We were excited on the way going to the game.”

Palmer said he had swapped his focus to football and the upcoming season. The high school season kicks off in less than three weeks around the state.

“I was kind of rusty,” Palmer said. “I’m going to get back in the groove by tomorrow.”

Selma will begin play Saturday at 1 p.m. against Florida in Pineville. With the second chance as motivation, the team hopes to be bringing a state championship trophy back to Selma next week.

“Now we know what it’s like to lose and we don’t want to feel that again,” Turner said. “We are way more motivated this time.”