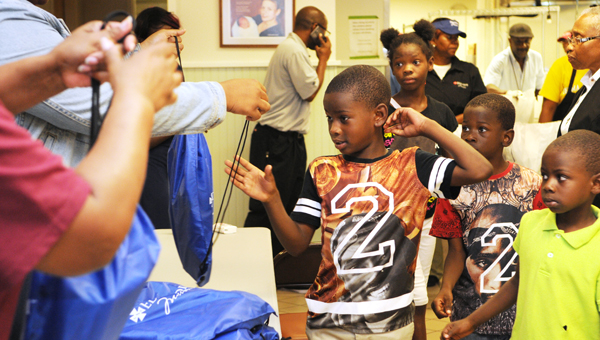 Anthomy Satwhite, 7, reaches for a drawstring bag at the Edmundite Missions’ “Slice of Hope” party Tuesday.

As early as 8 a.m. Tuesday, people began lining up at the front doors of the Edmundite Missions’ Bosco Nutrition Center.

By the time the doors opened two and a half hours later, several hundred people were gathered outside, ready for the missions’ annual Slice of Hope Pizza Party and School Supply Give-a-Way.

“It’s one of our ways of giving back,” said Chad McEachern, president and CEO. “We sort of give one last blast of summer fun by throwing a street party.”

With the help of Domino’s Pizza, the Edmundite Missions was able to provide bagged lunches each packed with a slice of pizza, bag of chips, fruit and a drink.

James Steele, Dominoes general manager, expected at least 600 slices would be given away during the event.

After getting a bagged lunch, children were directed to another table where they could pick up a free blue drawstring tote bag filled with school supplies.

McEachern said the bags were filled with all the basics such as hand sanitizer, notebooks, pencils, pens, rulers and other items.

Afterward, the crowd went outside to enjoy music and to socialize.

The missions is used to holding events that draw a large turnout. Earlier in the summer, the organization held its annual May Festival that drew nearly 2,000 people.

“It’s exciting,” McEachern said. “This is really what makes the mission what it is — a living, breathing part of the community. When you see folks come through, especially all the kids, you just see why we are here and the importance of our presence in the community.”

Joquelle Eaton, 11, attended the event with her two sisters and two cousins.

Eaton will be entering the sixth grade this year at School of Discovery and said the Edmundite’s gift will be a help to his parents ,who will have to provide school supplies for multiple children.

“It’s very generous, and it takes a lot of heart to do something like that; to give away stuff for free and just help people out. I feel like that they are very good people,” Eaton said of the Edmundites. “It’s going to help [my parents] a lot.”