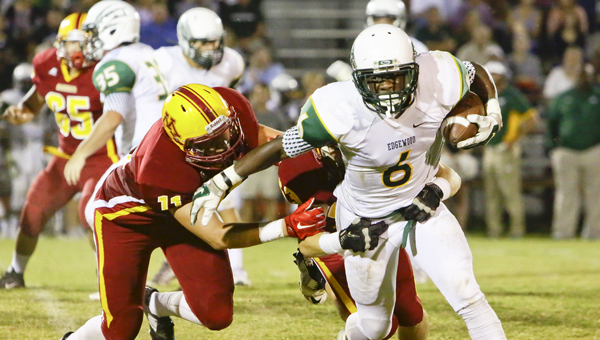 Morgan Academy tacklers bring down a ball carrier for Edgewood Academy during last season’s game. The teams have agreed to play Aug. 19 in a season opener at Faulkner University. –File Photo

Morgan Academy will open its season with a chance to end the nation’s longest high school football winning streak.

The school has agreed to play Edgewood Academy at Faulkner Stadium in Montgomery on Friday, Aug. 19, adding another tough game to a schedule that already included a challenging stretch of road games to open the year.

Edgewood has won 71 consecutive games, a streak that dates back to 2010.

Bessemer Academy and Monroe Academy will play at Faulkner following the Morgan-Edgewood game at 5:30 p.m.

The Alabama Independent School Association officially released its schedule earlier this month, but the four schools have since agreed to add in the doubleheader to begin the season, said Morgan Academy head coach Josh Thacker.

Thacker said the focus won’t be on ending Edgewood’s streak. Instead, it’ll be on getting better as a team.

Thacker said if the Senators do defeat Edgewood, it won’t be anything special because it won’t claim a championship or clinch a playoff spot. Instead, it’ll be just one win in a non-region game.

“You want to win the last one, not the first one so that’s our goal,” Thacker said.

If playing Edgewood isn’t motivation enough, the Senators may have a little more as well.

Edgewood is coached by Eric Folmar, who was named the Morgan Academy baseball coach for a short stint during the spring.

Folmar left for Edgewood Academy, his alma mater, after longtime Wildcats coach Bobby Carr retired. Thacker isn’t sure if his team will be fired up about that because he’s not sure the Senators got to know Folmar that well.

“We were all new together and we were still learning together, so I couldn’t tell you one way or another what kind of connection the kids had with him,” Thacker said.

“We were still in the early stage of getting to know one another, so I’m not sure how close our kids got with him.”

Morgan Academy will now open its season with a stretch five road games in six weeks. The Senators will play only one home game — a Sept. 2 game against Tuscaloosa Academy — before Sept. 30.

Morgan will also scrimmage Bessemer Academy Aug. 5 and plans to compete in a jamboree on Aug. 12.