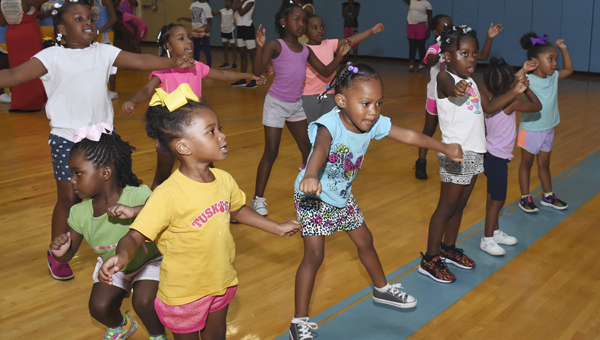 Selma High School is hosting a cheer camp this week for girls ages two to middle school age. There were 50 girls at Monday’s opening day of the camp, which will run through Thursday. The camp will conclude with a dance routine so that campers can show parents what they’ve learned. –Daniel Evans

Sisters Aireal and Ashley Brown know firsthand how much a cheerleading camp can impact someone’s life.

When they were younger, they attended a cheerleading camp in Troy and fell in love with it. Now, they are two of the leaders on the Selma High School cheerleading squad. Aireal is the team’s captain and Ashley is an experienced sophomore.

“We did tumbling and stunts, and I think that’s where I really learned to love cheerleading,” Aireal said.

The sisters are hoping to have the same impact this week during Selma High School’s cheerleading camp for girls between the ages of 2 and 14.

The camp started Monday and will end Thursday with a team routine that will be open to parents.

“I really like seeing the little girls happy,” Ashley said. “Once you start teaching them, their faces light up.”

There were 50 girls taking part in Monday’s portion of the camp. Each cheerleader was asked to find two young ladies interested in taking part and several of them found more than two.

Ashley was working with the 2-4 year-olds on Monday, so many of them were being introduced to cheerleading for the first time. She said they referred to the group as the “Baby Saints” so every time they felt their attention was slipping, they’d yell “baby” and the group — many of them toddlers — would yell back “Saints.”

“We would tell them to hold their thumbs up so they’d pay attention,” Ashley said.

Selma head cheerleading coach Chimeria Evans said she hopes participants gain confidence in themselves but also develop a love for cheerleading and the opportunities it presents.

“The greatest gain is to teach them how to be confident young ladies and to encourage leadership skills in them,” Evans said. “Maybe one day they will want to join a cheerleading squad like the Selma High School cheerleaders.”

The campers aren’t the only ones learning this week though. Evans said the Selma High School cheer squad, which has 25 members, is learning how to be leaders this week.

“It is teaching them whether or not they are ready for football and basketball season,” Evans said. “If you can teach it, then you know it, right?”