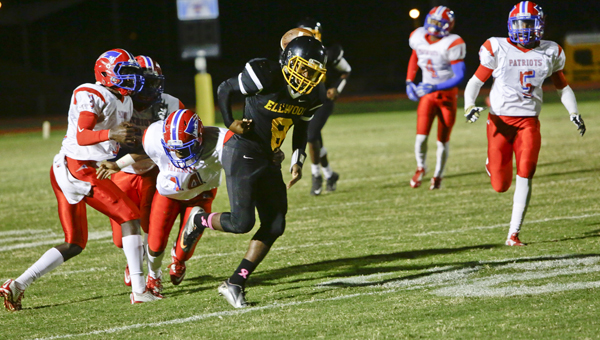 An Ellwood Christian player loses the ball during a game against Linden last season. The Eagles won’t be playing Linden this year, the first time the teams haven’t played since 2013. –File Photo

EDITOR’S NOTE: This is the final story in a series of football schedules previews for the seven teams from around Selma and Dallas County.

Ellwood Christian moved to class 1A, region 3 during reclassification in the spring, so the Eagles will be facing new opponents on their football schedule this year.

The Eagles will start their season Aug. 19 at Wilcox Central, a team that went winless last season. The game will be the first in a stretch where the Eagles will play five of seven on the road.

On Aug. 26, Ellwood will play at Francis Marion. Last season the Eagles defeated Marion 14-8 to begin their season on their way to a 3-0 start.

On Sept. 2, Ellwood will play its first home game of the season and enter area play. The Eagles will take on Highland Home, a team that went 3-7 last year in 2A and enters the year on a three game losing streak. On Sept. 9, Ellwood will play at Loachapoka against an Indians teams that finished last season 4-7, but still made the playoffs.

On Oct. 23, Ellwood will play at A.L. Johnson, followed by a road region contest against Notasulga. The Blue Devils went 9-3 last season and lost to Linden in the second round of the 1A playoffs.

On Oct. 7, Ellwood will play its final road game of the year at Autaugaville, another region contest.

Autaugaville finished the 2015 season with a 6-4 record.

The Eagles will have a bye on Oct. 14 before playing Oct. 21 against Isabella. The Mustangs finished last season 1-9.

Ellwood finishes its regular season Oct. 28 with a game against Southside at Memorial Stadium. It’ll be the first meeting between the schools. The Panthers went 2-8 in 2015.

Ellwood Christian’s football coach last season was Trey Pike, but his contract was not renewed, according to the Rev. Gary Crum, who is the chairman of Ellwood’s board.

Darrell Walker is serving as the school’s interim football coach.

Walker did not return a call Friday afternoon.