Turner waiting on official approval to be Selma’s volleyball coach 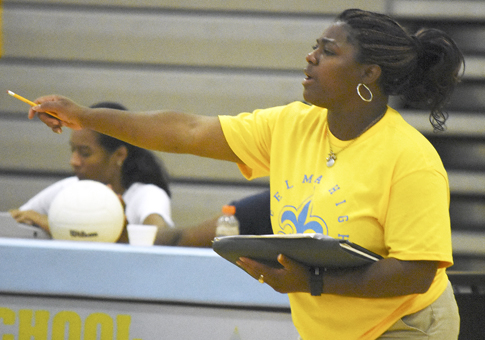 Selma High School volleyball fans likely got their first look at the team’s new coach Tuesday during a play date hosted at the school.

Turner’s hiring was not discussed by the Selma Board of Education during Tuesday night’s meeting. Selma head coach Melissa White said Turner was the person she has recommended for the position.

White has coached the team in recent years, but stepped down from the head coaching spot after being named Selma High’s athletic director in May.

Turner coached Concordia for one season, but has a decade of coaching experience to her credit. She last coached at the high school level in 2012, when she led Clarke County High School to the Alabama High School Athletic Association quarterfinals’.

Turner said if the job is approved at Selma High, she will be coaching track as well.

“She has the experience, high school, on the college level, she’s able to teach it as well as coach it,” White said.

White said the two have known each other as personal friends for many years.

“It was a hard decision to leave but it was an exciting position to learn that my colleague and friend took over the athletic administration position for Selma High and thought enough of me to give me a call and give me an opportunity to coach,” Turner said.

Turner coached the team Tuesday and White served as the team’s assistant coach. She said the play date was a chance for the team to continue to grow.

“We are both trying to get adjusted to each other ,but they are respectful and open and willing to learn,” Turner said. “They have a lot of potential and they want to learn.”